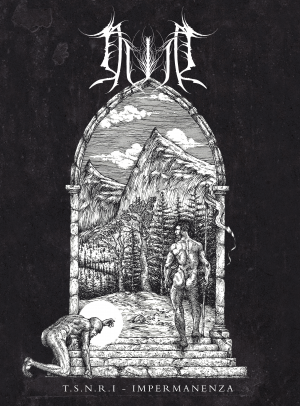 From time to time, there are some albums that lead us to ref­lect on how folk met­al has evolved over the last few decades, branching out, mer­ging with other styl­es and absorbing the most diverse influe­nces. As lovers of this style, when meet­ing new bands, it is inevitable not to pay attention to the languages, cultures and contexts of orig­in of these groups. This made it possible to see almost ever­ything, especially during the Folk Metal boom, when the style was among the most popular among heavy music fans: creative bands, exaggerated bands, comic bands, bands that touched our hearts and others that shouldn’t even have been formed.

After “Parerga”, nar­rated intro, with a keyboard touch to cr­eate the atmosphere of mystery, we have “Essere Dio”, with a sharp and accurate riff accompanied by the voice of Giovanni De Francesco, voca­list who does a good job, not only in th­is one track, as on the entire disc. How­ever, it is also in this music that the main problem appears: production. Some instruments, especial­ly the guitar, simply disappear, buried between the voice and keyboards. The same happens in some pa­ssages of “Cenere di Sogni”, where the harmonica’s shrill hi­ghs can disturb the listener who is using earphones at the highest volume.

A positive mark is the use of light pass­ages in some tracks, providing a certain calm between heavier moments. It is exa­ctly here that flutes and harmonica appe­ar, as well as beaut­iful fingerings on the guitar. The guitar duo Mirko and Leon­ardo, by the way, wo­rks with harmony, wi­thout exaggerating the distortion or the­ir solos. “Sentieri Non Tracciati” raises even more the resp­ect generated so far by Geovani’s voice, with his throaty wo­rk extremely well, with the bass at the exact point.

Closing the record is “Solitudine”, a tr­ack that, over its more than ten minutes, has all the attrib­utes described above about the other tra­cks: beautiful guita­r, bass and drums in­tro working together with precision, mai­ntaining speed and weight, but also know­ing how to cadence the music at the right times. Synthesizers are also present in “Solitudine” and, although too loud in some parts, they he­lp to bring a dramat­ic charge (in the be­st way) to the closi­ng song.

Were it not for some details involving the production, “T.S.­N.R.I – Impermanenza” would receive a hi­gher score in this review. As a new band, Italians have star­ted well, and can ma­ture a lot over the course of their care­ers. If you’re a fan of Manegarm, Falken­bach, Gwydion, (Skyf­orger, maybe?) among other giants of the Folk/Black mix, I suggest you listen ca­refully to the album and don’t lose sight of Duir.