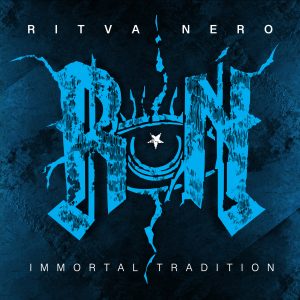 The first debut-album this year is ‘ Immortal Tradition’ by Ritva Nero.
When first looking at their info the tag Party Metal Folk gave me ideas of Korpiklaani and such bands. But as lead instruments Soprano Saxophone, Finnish Bagpipes and Nyckelharpa are used.
But this is no Korpiklaani spin-off at all. Ritva Nero makes a nice brand of party folk with a modern coating. But don’t expect too heavy music coming down from your speakers. The music tends more to folk and folk-rock. Occasionally a fierce bass or drum can be spotted, but they are way back in the mix, so they won’t affect the people who are just into metal.
There are no vocals in these tracks. Something which gets me bored fairly quickly, but not with Ritva Nero. The skills of this Finnish bunch are great. They manage to use their instruments in such a way the vocals aren’t neccesary here.
They selected a bunch of dances which were popular in de 1800’s. We can hear polka, mazurka and maanitus. And despite I don’t think they have made metal versions of this, they have give them a nice update. Some fun at your festival? Put Ritva Nero in the line-up!

The instrumental songs remind a bit of instrumental pieces of Schandmaul here and there. But looking at the whole album you can say Ritva Nero managed to create their own style of folk. Something nice for all kinds of festivals, danceable happy folk-music.
Something different, that’s for sure. If you don’t insist on fierce and heavy tunes, Ritva Nero is something you should give a listen!