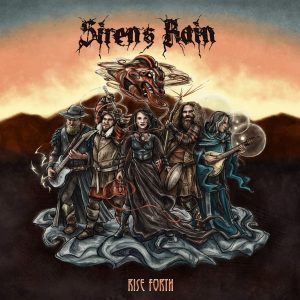 It took some time to get around to Siren Rain’s 2021 effort and honestly if it were not for several consistent problems, Rise Forth would be a solid release. Let us briefly look at each track before narrowing down the factors that set this album back from what could have been.

“Keepers” starts off with ambitious instrumental work, and it was clearly meant to be a strong track, and is in fact written well enough to warrant a music video, but there are some issues with the balance and the editing that prevent it from being a good opening track. The guitars for example feel overdone in the first part of the song, and the mandolins are treated almost like how one would approach a bass track in a Power Metal song. Lower the volume. Fortunately, this is not intrinsically bad, its just very odd to hear the balance between instruments being so obviously done. The track isn’t the smoothest on the album, but the vocals have their moments and the solo is an excellent demonstration of the potential these folks have. The solo is reminiscent of bands like Saor and has that almost ethereal yet thick high-flying guitar that many fans of the 80s guitar virtuosos will be familiar with.

The next track, “Corporeal Chains” is weird. It has a bluesy Jethro Tull feel to it, and with the clean female vocals one hears an eerie resemblance to Tull inspired Doom outfit Blood Ceremony. Once again it just feels like the influences brought in aren’t right for the genre, but the track itself is done well enough. Once again the solo has a completely different feel, going back to the atmospheric Malmsteen meets Saor guitar work.

Fortunately things begin to improve with “Rise Forth”. Here you have that blood-boiling high fantasy lyrics of carnage and destruction. Unlike the prologue which this reviewer omitted for lack of anything good to say, the spoken-word interlude gets the listener riled up, and this embodies all that is good about Folk Metal.

“Pennies for the Ferryman” has macabre subject-matter and operatic female vocals and some instrument work that might have made for a genuinely eerie track if not for the same shortcomings as the other tracks (more on this later). However there is a clear improvement in consistency as the entire song keeps the same general atmosphere as the segments where the solos happen which greatly improves the quality of the track. The beginning is also one of the heavier moments on the album.

“13 Steps to Hell” is also one of the darker songs on the album, and it has a smoother transition between the solo and the rest of the track. However the smoothness is only achieved by a subtle change in the tone of the solos. Here the music is heavier overall, and fortunately this helps keep attention given the main shortcoming this album has (in case the reader can’t guess what it is yet, don’t worry the tracks are almost done).

“Discarded Hope” is like “Pennies for the Ferryman” in tone but it has more operatic vocals, and tries to pull off one of those steady drum crescendos before kicking the song into full gear. Unfortunately, however the percussion is hurt by the production quality again here, and if only the drums were less prominent or maybe if the editing was better the song would have improved drastically.

This reviewer feels that “Folk Metal Funk” does not warrant any space on paper given the omission of the prologue but fortunately, the song isn’t as bad as the idea sounds. The track’s biggest flaw is it just goes on too long for an instrumental track that’s obviously intended as an obligatory “fun” track. Now with the songs out of the way let us move on to the problems with the album that bleed through every track.

Perhaps the biggest problem is that a lot of the material sounds amateurish, and considering the balance issues on tracks like “Keepers” and “Discarded Hope” it sounds to be mixing issues may account for some of it. So maybe its unwarranted to place the blame on the band. However, it might also be because of the songwriting to the extent that the solo transitions on tracks like “Keeper” and “Corporeal Chains” sounds so choppy. And on the topic of sounding amateurish, in case anybody involved with the album is reading some constructive criticism on the prologue is consider investing a few bucks to either get somebody else to read the lines, or consider acting classes just for the opening spoken-word part. It is the first thing your audience hears.

The second issue might be inferred by what was mentioned in the track-by-track section of the review. Essentially there are clashing influences, especially in the tracks with the solos that don’t match the rest of the tone. See the aforementioned sections about choppy transitions. Fortunately however, there is hope. If the first issue was addressed tracks like “Pennies for the Ferryman” and “Discarded Hope” could be great emotionally stirring tracks and “Keepers” could greatly improve in quality. And most of the album would just sound better. In fact, this reviewer added the former of those tracks to a thematic playlist alongside bands like Bathory and Månegarm. There are just some hiccups to be addressed. If there was a remastered or re-recorded edition of this album released at some later point, it would be a solid release. Until then Rising Forth looks like sophomore slump, but luckily, the hill isn’t steep.