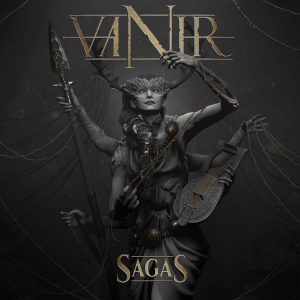 Danish Viking melodic death metal warriors Vanir are back in 2022 with Sagas.​ These warriors have released five well received albums to date and Sagas doesn’t disappoint. Like previous albums, Sagas, their sixth release, spans various Viking and Nordic related themes, however Vanir have sneaked in a J.R.R. Tolkien based song “Battle of Middle-Earth, in what appears to be a dedication to one of the most important fantasy writers in history.​

On this release we see epic melodic and a fierce soundscape highlighted through the vocals and guitars on all12 tracks. ​There really are no surprises here.​ Vanir provide the listener with epic Viking metal and storytelling.​ Their approach to this style of music is a bit different than bands such as Ensiferum, and Turisas, the emphasis is more in your face power and aggressive guitar licks, laced with screaming Viking vocals with less emphasis on keyboard melodies. ​I would equate their sound to be similar to Amon Amarth, but less of the commercial elements. Favorite tracks thus far would be “Battle of Middle-Earth”, “See The Dragons Ride”, “Dødsfærd” and “Andvari’s Curse”.​ For fans of Manegarm, Unleashed, and Einherjer.​