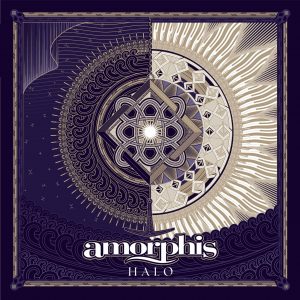 Founded in 1990, Amorphis enters year 32 as a band with their new release “Halo”.  This marks their 14th studio album and with no pun intended, the band has “morphed” from straight death metal to a polished outfit playing progressive and melodic heavy metal with lyrics based loosely off the Kalevala which pays tribute to their Finnish roots.

All eleven tracks on the record bring the signature Amorphis sound with some surprises. “Northwards” features a brief choral structure inserted which perks up the listeners ear.  Personally I would like to see the bad add more choral elements, it gives the music a more dynamic and classic Therion feel to it.  On several of the tracks, keyboardist Santeri Kallio uses some classical organ/Moog sounds to give the songs a 70’s retro feeling. Vocalist Tomi Joutsen’s growls sound more animalistic than “deathy”, giving the clean and growl dynamic a more organic sound. Guitarist, Esa Holopainen, fresh off a successful solo record with Silver Lake, brings his masterful style of riffs and solos to the record rounding out the signature Amorphis sound.  “Halo” is the finishing piece, the master work of art and finale to the trilogy that began with “Under The Red Cloud” (2015) and continued with “Queen Of Time” in 2018. Favorite songs on this album: “Northwards”, “The Moon”, “Windmane”, and “When The Gods Came” (along with the other seven songs) that bring extreme monumental moments to the listener.  This record is a strong candidate for album of 2022.