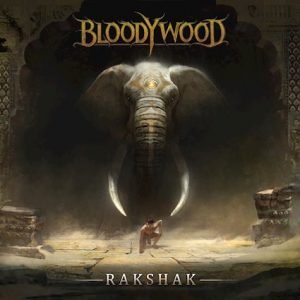 What has started 2016 in New Delhi with some funny Metal Covers of famous Pop Songs and a kind of “Parody Metal” approach, has developed to properly the most sucessfull Metal Export​ out of India: Bloodywood. I am following this band since years and was always very impressed by their singles they released on Spotify. The biggest highlight was of course their single “Ari Ari”, which was for sure as well a turning point of Bloodywood and they reached a worldwide notice​ in the Metal Scene. It is quite hard to explain the style of Bloodywood, but just take System of a Down, Korn, Limp Bizket and​ Linkin Park and mix it with Traditional Indian Folk Music and then you come close to it. On the 18.02.2022 Bloodywood now finally released their first Full-Lenght Album “Rakshak” and my unpatient waiting for it was absolutely worth it, as the band is delivering on approx. 47 minutes everything I was waiting for. On the first song “Gaddaar” the sitar plays, grooving guitar riffs are smashing in,​ while Jayant Bhadula is blowing you away with his growls.​ On the opossite​ Raoul Kerr inspire us with his rap skills. What a start into the album! The second song “Aaj” is starking a little bit slower with some nice Indian flutes and Rap parts in order to explode again in great Nu-Metal vibes. By the way it is also important to mention that Bloodywood is actually a three-headed band and the third one, which I had not introduced yet is​ Karan Katiyar, mastermind behind Bloodywood and responsible for the whole production,composition and additionally playing the​ guitars and flutes. On “Zanjeero Se” the band is taking out a little bit of the tempo and are offering a great kind of alternative Metal-Ballad with the support of some female and male singings. A short guitar riff is opening the next song “Machi Bashad” in order to let us nod to the traditional Indian drums, but it would not be Bloodywood if this traditional Indian Drums would be integrated into a​ great Nu-Metal title, which understands to inspire! On “Dana-Dan” Raoul is delivering us to a very groovy guitar riff the most aggressive and fastest rhymes on the album and Jayant is just destroying everything in his way with his massive growls. The variety between English and Hindi vocals are working out extremely good on the whole album and are giving the album an very unique touch. Slow Indian flutes and drums are opening the song “Jee Veerey” and Bloodywood is reducing​ a little bit the aggressivity​ and is bringing a​ more slower and melodic song. I just can say whatever Bloodywood​ do, they do it right! For me it is really incredible how the fusion of Indian Folklore and Metal is working out. The next song “Endurant” is just the next best example for this great combination. “Yaad” has again a more calm approach and fits perfect into this very diversified release. “Bsdk.Exe” is a lyrically real great anthem against racism and any kind of extreme believes and can score in any respect. While listening to this album the time is really flying by as every single song is exiting and the album had no weak points or album fillers.​ You reach the last song “Chakh Le” in which Bloodywood is again putting all their skills into one track and you get the full load Bloodywood can offer. Even if the year is very young I already consider this album as a big canditade not only for the best “Folk Metal Debut”, but in general as one of the best “Folk Metal Albums” in the year 2022. It is quite interesting that Bloodywood is basically the first band who can find this​ great balance between Traditional Indian Folk and Metal. Due the timing is right I also would like to advise our readers that Bloodywood is basically scheduling this March an European Tour with a lot of shows in Germany, Belgium, The Netherlands, Denmark, Czech Republic, Italy, France UK and Austria. Hopefully the pandemic situation will not lead to again to postponements of those gigs. Bloodywood: Thanks for this masterpiece and hopefully see you in Vienna soon!​ ​