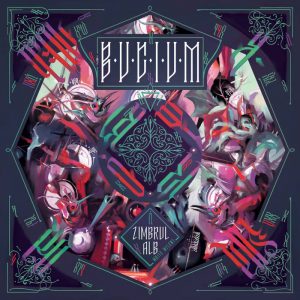 Listening to Bucium’s new album ‘Zimbrul Alb’, I take a short peak at the review of their previous album ‘Mioriţa’. This was a great album, but lacked a bit of metal. Would that be better this time? Well, first of all, ‘better’ is not the right word here. The musicians of Bucium have such great skills, an album which isn’t that loud is musically just as nice.
But when you prefer a certain level of ‘loudness’ in your music, it’s there. Don’t aspect moshpits and throwing around people at their music, but the music on ‘Zimbrul Alb’ is not always the dreamy hot summernight folk they did on their previous album. There are lots of rock and folk-elements in this album.
When you start to listen, don’t think at once you don’t like it, listen to the whole title track ‘Zimbrul Alb’ then you get a good idea of how they mix music. The compositions are great and the songs are never straightout loud or dreamy of whatever. There are lots of changes within the songs, you can go from dreamy to fierce in a song and the band pulls this off with great skill. They can easily play a song, or composition is maybe a better word, as ‘Greuceanu’ for ten and a half minute, without boring you a second.
In ‘Cântecul soarelui’ we can hear Ligia Hojda. Her voice fits perfectly in the music and it blends very nice with Andy’s voice.

The artwork is again in the beautiful Bucium-style we know. Nice carton box with beautiful artwork. In this box you’ll find a card for every song with again beatiful artwork on one side and the lyrics in Romanian en English.

Great album when you like lots of folk, in this case Romanian folk, and you don’t need it all at the maximum loudness. Fantastic compositions by this great musicians.