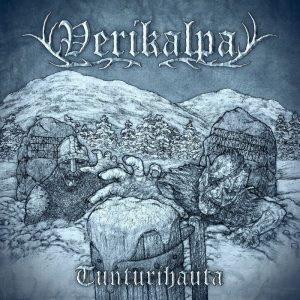 Verikalpa are the next in a line of great Folk Metal bands from Finland, following in the footsteps of such luminaries as Moonsorrow, Finntroll, Korpiklaani, Ensiferum and Turisas.​ Lofty company indeed, but with this, their third album, Verikalpa have emphatically marked their territory and cemented their place in the upper echelons of Finnish Folk Metal.

As the lyrics on Tunturihauta are in the band’s native tongue, Finnish, therefore rendering them completely impenetrable to the rest of the world, it’s hard to really get a handle of the subject matter. However, working from the song-titles alone (I’m currently learning Finnish and Google Translate is your friend), they follow the familiar Folk Metal tropes, namely Battles, Alcohol, Ancient times, etc. That said, we all know that language is pretty much irrelevant in the world of music as the bands we love come from far and wide and it’s the music which does the talking. Lucky for us, then, that just about every song on Tunturihauta is immediate, instantly catchy and these melodies will be stuck in your head for days. There were signs of potential on their previous albums, but this time around, Verikalpa have struck gold. Musically, they slot neatly into the type of upbeat and melodic Folk Metal as purveyed by the likes of the aforementioned Finntroll and Korpiklaani, albeit with a liberal sprinkling of Moonsorrow’s keyboard magic. This is perfect musical accompaniment for drinking beer, and I imagine that Verikalpa would be an absolute blast in the live setting.

If I had to give a criticism, and it’s a minor one, it’s that there isn’t much variation here. Every song follows a similar, familiar pattern and musically, Verikalpa are very much a one trick pony, steeped in the sound of their contemporaries. But when the trick is this good, you might as well perfect it…and they have. This is hook-laden, straight down the line Folk Metal and I honestly wouldn’t want it any other way. Those looking for a ground-breaking band who are pushing the boundaries of the genre will find slim pickings here, but fans of straight down the line, quality Folk Metal will love it! I certainly do.

2022 is already proving to be a great year for Folk Metal and Tunturihauta is yet another album that is likely to be finding a place on end of year lists come December. Lovely stuff!