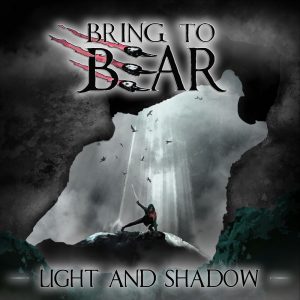 Bring to Bear is a symphonic folk metal band hailing from the United Kingdom. In October 2021, they released their debut three song EP “Light and Shadow”. Bring to Bear continues with the symphonic ‘beauty and the beast’ style of metal, giving us female clean vocals and male guttural vocals mixed with a small folk injection of accordion along the way.​ The EP itself consists of two original songs and one Queens of the Stone Age cover song, “No One Knows”.​ Their cover rendition is probably the best song out of the three, the metal spin and up tempo beat put on the song breathes new life into it. (Dave Grohl would be proud!)​ Lead singer Izabela Smyt, has a powerful voice and her vocals fit very well within the construction of the cover song along with the harsh growls of keyboard-accordionist Ian Tarboton.​

​The other two songs in my opinion are just okay, I think Bring to Bear is trying to push the listener to a symphonic level like Epica or Nightwish, but doesn’t fully get us there.​ Missing is some of the complex orchestrations and grandiose arrangements. There is solid guitar work from guitarists Hristo Nikolov and Nik Rotas, who do create good melodies and plenty of hooks and opportunities to head-bang, but again, not to the level of Leaves Eyes or Within Temptation.​ After a few listens,​ I want Bring to Bear to create an atmosphere where I wish my volume could be turned up past 10 and immerse myself in the experience, but they really never get me to that level. I think this is a great debut release to get the metal public to know their name and know where they are going. With some solid arrangements and epic sound, they will be running with the pack.