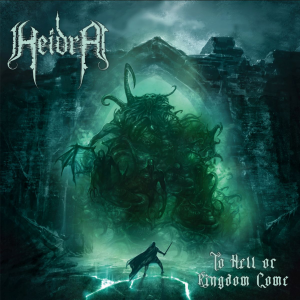 Danish Folk Metallers, Heidra have returned with another album, the latest installment in the story that started with their first concept album. This release makes some departures from the musical style from Awaiting Dawn but isn’t far removed from what one would expect to evolve organically from The Blackening Tide. Because this album is yet to be released, this review will cover the album in broad strokes, to leave more surprises upon release.

Aside from the obligatory intro track, every song on this album is nothing but no-frills Heavy Metal with the odd nordic musical influences, but don’t expect tracks like “Wolfborn” here (even though there’s a sequel to that song here), the role of traditional folk music has been diminished to background orchestrations and song structure much like how Primordial treats celtic music.

What makes this album especially good, is how the music takes a far heavier tone than their debut album, and a more traditional and heavier approach than on The Blackening Tide. And the music isn’t the only thing with more bite, the vocals have it too. While clean vocals are reminiscent of the high pitched power metal vocals, underneath the operatic embellishments one can distinctly make out a more jaded and rough tone. It’s almost as if Chris Boltendahl or Bobby Blitz tried to sing tracks off the Keeper albums. But it definitely doesn’t sound bad, it just sounds like there’s some character to the vocals, although they might feel strained at select few moments. So what is the bad parts of this album? Well nothing really, the only reason the score isn’t higher is because of the scoring scheme this reviewer uses, and in terms of how the good aspects are present across tracks, the only criticisms would involve a track by track, which might spoil the album. But all in all, when the release date hits, join Heidra on a journey To Hell or Kingdom Come.