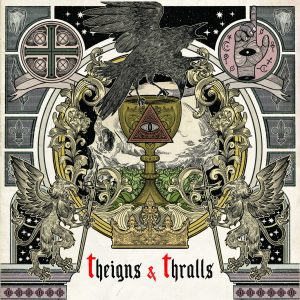 I’ll start with a caveat; I’m a huge Skyclad fan. In fact, they are my favourite Folk Metal band and one of my all-time favourite bands, full stop. With that in mind, given that Theigns & Thralls is a new project from Skyclad frontman / songwriter, Kevin Ridley and features Dave Briggs (Waylander) and John Ryan (ex-Cruachan), I went in with high expectations. I am very aware that in doing this there arises a risk of bias, both positive and negative, so I listened with as open a mind as I could.

With such an impressive pedigree you’d be forgiven for expecting Theigns & Thralls self-titled debut album to be a rip-roaring Folk Metal monster. In reality, however, it is a much more nuanced and varied offering, with one foot in the Metal camp and the other firmly planted in traditional British Folk music. It is as much Damh the Bard or Levellers as it is Skyclad and If I’m honest, the result of this juxtaposition is a bit of a mixed bag, quality wise. When the songs are good, they are very good. On this side of the coin, you have the beautiful melancholy of “Strive” and “Lord of the Hills”, the brilliant Levellers-esque stomp of “The New Folk Devils” and the wonderfully catchy single “Drinking” which features a variety of guest musicians, most notably Jonne Järvelä from Korpiklaani. On the flip side, however, you have the forgettable instrumental “Flora Robb”, the trite “Today We Get to Play” and alternative version of the cringeworthy “Queen of the Moors” which originally appeared on Skyclad’s “Forward into the Past” album. An honourable mention should also go to the Electronic / Industrial remix of “Life Will Out” which rounds of the album and is an unexpected personal highlight. As Kevin’s voice and song writing style are both so distinctive, many of these songs would fit very neatly into the Skyclad back catalogue and as you might expect, the lyrical themes here are on brand Ridley fare; hardship, politics and of course, drinking.

As I touched on previously, Theigns and Thralls is a hit and miss affair that has moments of brilliance, but it is marred by too much lackluster filler material. I really wanted to love it, but I’m sorry to say that I don’t. That said, it’s a solid album with enough quality songs for fans of Skyclad or Kevin Ridley’s solo project to get their teeth into, but it is far from being an essential purchase.