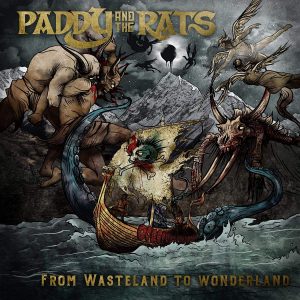 Paddy and the Rats are an interesting Celtic band from Hungary. The music on this album is a little all over the place. Not really a bad thing , just different. After a nice opener duo of Wasteland and Ship will sail, comes Party like a Pirate which I don’t think sounds very pirate like as it has a more electronic party vibe, Not bad just not my cup of tea. The next song, After the Rain is an album highlight and a memorial song for the bands accordion player Bernie Bellamy who passed away close to the release date of this album. The song was added as a tribute and the album serves as a fine tribute as well since his playing is all over it. Northern Lights is another track that’s hard to classify it has a little bit of a metal vibe and the lyrics are well done. I like it but paired with the next song Matadora I got lost in the rhythm which is close to the same except for the cool Spanish break.Everbody get up, brings back that poppy sound but quickly morphs into a rocking punk  tune that I really liked. I would like to hear more traditional sounding instruments in most of the tracks but the song selection and quality is good.Hometown Kid and Heartbreaker are both fine rock tunes with some flair but Rumble Outta Here has a much more Celtic feel and the accordion sounds great. The Last Hunt carries on with a very traditional feel and the Album Carries out the promise of the title from Wasteland to Wonderland with the nice ballad Wonderland. Sort of a lullaby with a bit too much polish that makes it sound like a pop song. Overall it is a pretty good album, well done but slightly overproduced. I think most of these songs would sound better without so much gloss added anyway a well done tribute to Bernie Bellamy,RIP