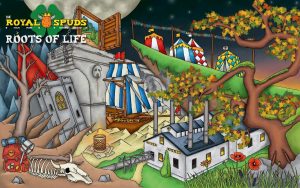 The Royal Spuds released a new project this week titled,”Roots of Life”. I saw the artwork for this on the bands Facebook page and I was really impressed. I think it is one of the best covers I’ve seen in a long time. I think maybe bands are neglecting the artwork because they sell mostly mp3 files now. Anyway good on them for that great art. The music is also good. The tracks are pretty diverse with a few driven punk tunes like Alien and Wheres your future mixed in with nice tracks like Festival grooves and Steelworkers Lament. I was really taken by the bands reworking of Haul away Joe and Back home in Derry I love both of those songs and these are some of the best covers I have heard. I was also really impressed by the lead guitar work mixed throughout the album. It adds a nice edge when its least expected. In all I think the Royal Spuds really stepped it up on this album . Its the right mix of salty and sweet and it has lots of musical flourishes scattered about the tracks to keep you interested nice banjo and guitar along with other surprises as well. Vultures is an interesting track as well sounding almost Egyptian at times but still maintaining a Celtic feel . Very impressive. While it is a little short with only 8 tracks the quality is excellent and the band has made a great addition to anyone’s  music library.