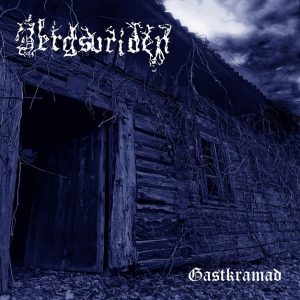 Hello fellow trolls!  Today we give a listen to Bergsvriden, this troll-ish two-piece black / folk metal band hailing from Sweden fourth release, “Gastkramad”, which loosely translates to “Touched by a spirit of the dead” in the Scandinavian folklore. The band draws inspiration from “the dark and swampy Swedish forests” to create a combination of old school black metal which the listener can definitely disseminate just by listening to the second track “Vargahamn”. It is reminiscent of late 90’s black metal with folk undertones.  Here the two piece gives us lots of tremolo picking and effective use of double bass drums to create a Mayhem sounding track.   Track number three, “De huvudlösa följets färd “(The journey of the headless entourage) , is a more epic track giving off a more Windir vibe which is fine by me, the two Swedes do it well and pull it off!  I love the melody on this track.  Track number four, “Den vita fruns klagosång” (The white lady’s lament) creates a Cradle of Filth sounding song laced with folk melodies, female backing vocals and bark like chats.  So as you can tell, each song is representative of a particular style of black metal.  I am not sure if this was the true intent of the band, or they are paying homage to their black metal idols, but it works effectively.  The rest of the album comes off the same, there are two more instrumentals and the last song is a little more epic than the others, similar to the second track.I feel as if this album is telling the listener a story, unfortunately I have no lyrics to translate to see if there is a lyrical theme running here, I can only go by the song translations and the instrumental interludes sprinkled throughout the record.   My favorite tracks are “Vargahamn”, “De huvudlösa följets färd” and “De blåkultas natt”.  These are the more harsh black metal tracks which calm my nerves and settles me into a blackened euphoric state of mind.  Overall the musicianship is good; production quality is very good considering the retro feel of the songs. (I am glad they didn’t try to go ‘necro’ with the recording.)  This is a solid release for those blackened folk metal listeners, just wish the tracks were a bit more “epic” sounding to want me to play them over and over again.