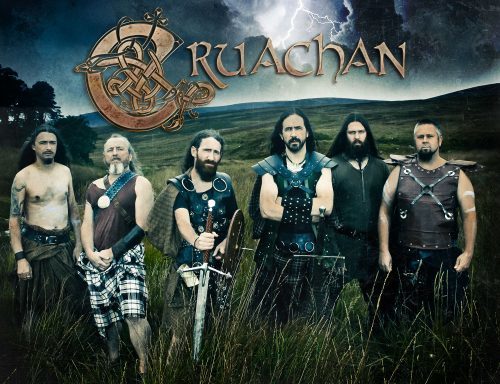 Cruachan changed the title of their upcoming album to ‘The Living and the Dead’. This title fits better to all the songs an absolute the new album.

The Hawthorn is about a mother returning her recently deceased child to the earth, to the faerie folk.
Cruachan statement: “The Crow focuses on the recent mother and baby home scandal in Ireland, The Morrigan comes to take the dead babies to the other world.
The Light is an instrumental that we are now playing live.
The Reaper was written about my dad when he was alive but I knew he had given up on life, the song was written out of frustration but it’s become even more poignant now as he died last year. I hadn’t read the lyrics since he died and only this week we started rehearsing it and the lyrics were devastating to read now that he’s gone.
The Harvest is about the importance of harvest time in ancient and recent Irish culture.
The Festival is a happy instrumental to compliment The Harvest.
The Ghost is another mother and baby home influenced song about the spirit of one of the deceased children, guest vocals will come from Kellie Schaefer from Athiest.
The Queen sticks out a bit as it is a huge song about the time Grace O’Malley met Queen Elizabeth in London.
The Children …. mother and baby homes again, grim grim grim.
The Changeling …. faeries stealing babies lol, this will feature guest vocals from Nella.
The Dark is a short black metal explosion.
The Witch will feature guest guitars by Stu from Venom, the song is about a pagan forest witch but it’s also a metaphor for female empowerment.”