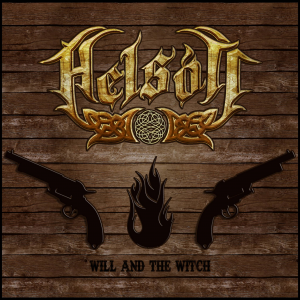 Helsótt’s third album is an ambitious record. Whereas their two previous releases stuck very much to the tried and tested Folk Metal thematic tropes of Norse Mythology and Pagan history, this time around they have thrown their fanbase a real curveball with this, a concept album about Billy the Kid. In the words of vocalist Eric Dow himself “It’s basically a fan fiction story about how Billy the Kid became the fastest gunfighter in the wild west”. This description will either pique your interest or potentially put you off. I must admit that I’m not generally a fan of concept albums. All too often they come across as self-indulgent and / or musically overblown and pompous. In this case, however, with its combination of ever-changing tempos, musical experimentation and more traditional Melodic Death riffage and harsh vocals, Will and the Witch kept me engaged from start to finish.

I’ll Make Ya Famous is the perfect opening track with its immediate death / trad metal groove and gruff vocals backed by atmospheric strings and Maiden-esque lead guitars. Southern Shine sounds like the bastard offspring of Trollfest, Finntroll and Diablo Swing Orchestra with its slinky boogie / trollish vocal trade-off. Title track Will and the Witch seamlessly melds Symphonic Metal histrionics with guitars that veer between Iron Maiden and Obituary. Other standout tracks include Navajo Crow, a downbeat chant led acoustic song somewhat reminiscent of Thrawsunblat and Skin Out – clocking in at 9 minutes and 45 seconds, it’s a master class in experimentalFolk Metal. Imagine a collaboration between Moonsorrow, Skyclad and Northern Oak and you will be somewhere close.​

This is a versatile, eclectic and refreshing take on the Folk / Death Metal genre and is certain to delight existing and new fans alike. If you are of an open-minded disposition, then Will and the Witch will be a very rewarding listen and could well be one of the highlights of your year. This is one for those who like their folk metal on the more experimental, quirky side. That said, there is no shortage of nice trad metal riffage and guitar widdling to be found for the traditionists. If you are willing to give it a chance, you will find this album to be a highly rewarding listen. Each track is different from the one preceding it and each one brings something fresh to the party. Of course, this is not an album for everyone. It is deliberately, some might say provocatively, quirky, but to me that is part of its charm. I don’t think I have truly fallen in love with an album for its sheer audacity and all-out bat shit lunacy as I did on hearing this for the first time. I truly thought I was beyond being surprised by a band, but Helsótt just gave that theory a hefty kick in the plums. Will and the Witch is a triumph of an album from start to finish and despite the eclecticism, it all comes together nicely as a complete album, which I suppose is the highest praise to be given to a concept album. It rare these days that I am genuinely taken aback by an album, rarer still that I am instantly won over by it. This is one of those times. Will and the Witch is a revelation. Embrace the madness.