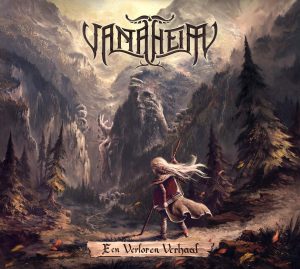 5 Years after their first EP “The House Spirit” the​ Dutch Epic Folk Metal Band Vanaheim released their first Full Lenght Record “Een verloren verhaal” on the 04.02.2022. The first track “Uit Steen Geslagen” starts with a very nice folky keyboard​ interlude including​ mystical chants after it explodes after one minute into great blast beats and fantastic guitar riffs accompanied by an epic orchestral melody. Due the lyrics are kept in Dutch this time the vocals have a​ much more authentic touch​ and​ Zino (singer) is fully delivering growls on the highest level possible. Even that the compositions of Vanaheim are quite long, 4 tracks out of 6 are ranging from 7 to nearly 12 minutes, they are absolutely able to keep the level going throughout their songs. My big respect for the same, as I do not know a lot of bands who can keep such a quality​ over such long distances. On the next track “Onbevangen” the epic journey continues and it is really amazing on which high level the band can perform. Even that most properly the symphonic and orchestral parts are coming from the keyboard the quality of the sound is simply amazing, also keeping in mind that Vanaheim is still an independent band. The big variation in their songs, the perfect mix between orchestralic, symphonic,folk episodes and chants combined with their very impressive metal makes this album a pleasure to listen. With the third track “Rusteloss” the band gives us some time to breathe and delivers us an folky relaxing instrumental break. The next title “Reuzenspraak” is a very nice​ mid-tempo driven track with a lot of love to the epic detail. If it is the great chants or the clean singing episodes or the great folky symphonic melodies is hard to say. At the end everything fits together and makes it the next great track on this debut. With “Verloren” we receive​ a nice folk song and the second break to relax​ on this record. “Gevallen in de Nacht” is the last song of this very convincing album​ and Vanaheim unleashes in 11:22 minutes​ once again all their​ power the band has to offer. As a special “Een verloren verhaal” had been released as double CD and you additionally receive an “Folkestral Version” of the 4 Epic Folk Metal tracks. If this was necessary or not can be discussed. However I really need to state that I had seldom be convinced by a Debut album like in this case and can really recommend it to all fans of Ensiferum, Equillibrium or Heidevolk! Big congratulations to Vanaheim for such a great Debut!​