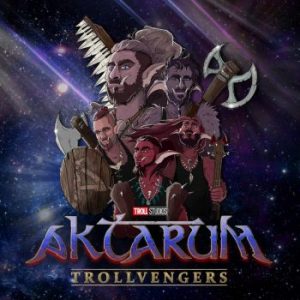 Never thought Aktarum would remind me of Munarheim, but in ‘Tale of Trolls’ they really do. It’s probably the way they added the female vocals which triggered this. Listening to the whole album more reminders of bands will pop into your mind, but for a trollband it’s of course not surprising when Finntroll elements can be heard in the title-track ‘Trollvengers’.
But these things are not a shame. It’s not they copied the whole thing, they just got obviously influenced by other bands. And maybe it’s just nice. The Belgians were always very nice, but never the top-end band in this genre. There was always some room for improvement. And when you can get this by listening to others, well that’s what you have to do.
And they did this well, we can easily say ‘Trollvengers’ is their best release so far. When you’re a tiny bit into the troll-music, you should have least give this a few spins. Don’t be too harsh on the first listening, this will grow on you more when you give it some time.
Best Aktarum release since the beginning of Trolls…