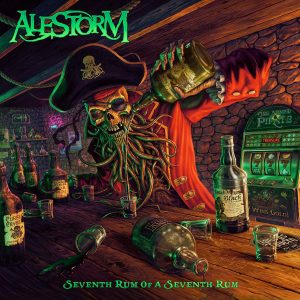 Back when the review for Live in Tilburg came out over a year back, there was mention that Christopher Bowes acknowledged their new material was “terrible”. And with one more album under the belt it seems that Alestorm might not fully have learned from the backlash generated by their experimentation with rap on Curse of the Crystal Coconut. The tracks that doesn’t paint a thin veneer coating of Metal over what are essentially rap music or dance music amount to just over half the album, but four of the eleven songs essentially regress to the worst elements of COTCC. It must be said however, Alestorm have pulled off some musically interesting feats on some of the worse tracks. On “Battle of Cape Fear River” Alestorm have managed to make their riffs (if they can be called that), sound like they were sampled from a sea shanty for a rap track. While “Come to Brazil” was also one of the more questionable tracks on here, it was interesting to see Alestorm use those dark atmospheric keyboard licks that Finntroll are so fond of. At the end of the day the songs that were good were great, and the songs that were a bad were terrible. As such, Seventh Rum of a Seventh Rum is basically a game of darts in a black light room. Even where they do something fresh with their same formula it has an element of risk to it. For example, while Alestorm has been playing chiptunes influenced keyboard music almost since their inception, on this album they take it to the same level as DragonForce did on Reaching to Infinity. Alestorm being one of the torchbearers for Folk Metal, Pirate Metal, and Power Metal in the public eye need to be careful about representing those genres badly, and while a lot of their album is well-written, heavy, dynamic, and above all an improvement over what they had, there is still a lot that will be hit and miss. Listeners who don’t mind the electronic tendencies of recent DragonForce and the experimentation on Alestorm’s previous album will most likely be fine with this release, but for those who have more selective tastes, the album will be a more lukewarm effort.