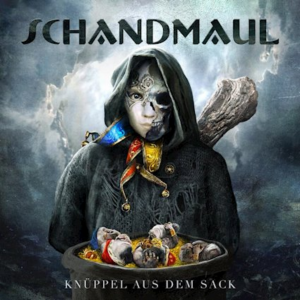 Schandmaul adds another one to their impressive list of releases this week. Despite the fact they’re not the heaviest band in the scene, they are unmistakenly one of the big leaders in the German Medieval/Folk Rock/Metal scene. The Munich-based outfit has been a reliable force of top-notch, high-level folk rock full of exciting, captivating storytelling, performed by genre-trademarked instruments such as bagpipes, hurdy-gurdy and folk flutes.

I must admit, I’m not very familiar with their latest releases, but the older releases of the band are packed with great songs. Songs where you have to know German to fully enjoy them, because the storytelling is phenomenal. A very high standard for new albums, does the band pull it off, to make such great compositions again?

The title of their new release, Knüppel aus dem Sack, refers to a fairytale by the Brothers Grimm, “The Wishing-Table, the Gold-Ass, and the Cudgel in the Sack” (original German name: “Tischlein deck dich, Goldesel und Knüppel aus dem Sack”).​ The title-track is a rather solid rocksong compared with the most of their well known songs. Throughout the album, there’ s a bit more power I think. And I don’t know if this is the reason, but I notice I’m not totally thrown away by the stories with this album.
The use of the bagpipes, hurdy-gurdy and flutes is very nice this time, they are of great influence in the compositions, the ladies have an important role on this album, which is great. It gives the Schandmaul sound this nice folky taste.
It’s an album of great quality, but you can’t expect less by these great musicians. But this said, there is no song which reaches me like their great songs from the past. This album fits my ‘German Folk/Medieval Rock’-playlist perfectly, each and every song is simply good enough.

A very nice piece of work by Schandmaul, the fans will be excited.