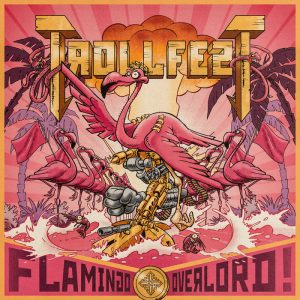 Let’s start by addressing the (pink) elephant in the room… This is not the album I expected Trollfest to make in 2022. After all, they’ve spent the best part of two decades releasing seven albums of high octane, fast and furious Balkan Folk Metal, with shrieked and barked vocals. Therefore, you could be forgiven for expecting pretty much more of the same, allowing for a little deviation and development. Well, you would be wrong. Very wrong.​ What Trollfest have delivered this time is a very unexpected summer party album, filled to the proverbial brim with songs dedicated to drinking and, er, flamingos. Yes, flamingos. For reasons known only to themselves, Trollfest have developed a strange obsession with the gangly pink birds, to the point where they have decided to approach the whole project in extravagant pink drag outfits.​ Also, the lyrics are completely in English this time around, as opposed to Trollspråk (early) and Norwegian (later albums).

​Here’s the thing, though. As a long-time fan of the band, having been along for the ride since their debut in 2005, I really enjoyed this album. It’s all upbeat and fun and is the perfect soundtrack to a summer pool party / road trip.​ There is little musical variation here, as is par for the course for Trollfest, but when the music is this fun, it really doesn’t matter. Personal highlights are All Drinks on Me (feat. Jonne Järvelä from Korpiklaani), Dance Like a Pink Flamingo and Pina Colada.

​Only time will tell if this album indicates a true change of musical direction for this strange band or if it a mere blip, intended as an accompaniment to their (sadly unsuccessful) Eurovision bid.​ I’ll be happy either way, to be completely honest. Trollfest have always marched to the beat of their own drum and long may they continue.