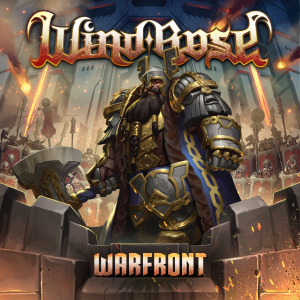 What do you get if Blind Guardian married Ensiferum and had an affair with Sabaton? The short answer is you would get a five piece bunch of Dwarves from Pisa, Italy named WindRose. “Warfront” is the follow up to the well received 2019 album “Wintersaga”.  Many of you may know WindRose for their Minecraft-themed song “Diggy, Diggy, Hole, which clocked over 30 million views on YouTube, however,  WindRose is more than a novelty act. WindRose is truly epic power metal, done with craftsmanship.  All ten tracks on Warfront bring plenty of powerful melody, majestic vocals, and catchy chorus which will make you sing along as you bang your head! Most of the songs are war themed with some J.R.R. Tolkien lyrics thrown in.  Vocalist Francesco Cavalieri belts out each song so strong and mighty, Claudio Falconcini’s catchy guitar riffs and hooks along with the dramatic orchestrations of Federico Meranda’s keyboards add to the epic power within the songs.  Behind them we have Cristiano Bertocchi on bass and Federico Gatti on drums, driving the rhythm and invoking some cool tempo changes. The active listener will hear many renaissance melodies weaved through each powerful anthem.  Favorite songs would be all of them, but these stand out as exceptions “Fellows of the Hammer “(love the chorus on this one!), “Tales of War”, and the epic “I am the Mountain”. Overall a solid release, these guys keep getting better with each release.