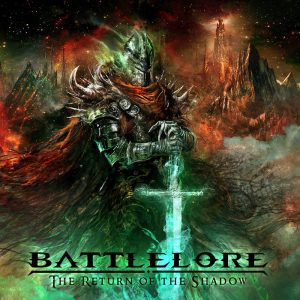 Wow, I never expected Battlelore to come back with an album. I was already very excited when they decided to pick up the band again after so many years. But must admit I was a bit disappointed by the ‘new’ release ‘Bonus Tracks’.
This tempered my enthusiasm a bit when ‘The Return Of The Shadow’ was announced.

When you start listening to the new album it’s clear from the start with ‘Minas Morgul’: Battlelore is back. It’s if they never stopped what they were doing. ‘Doombound’ was a bit of a different album, not bad at all, but different. ‘The Return Of Battlelore’ oh sorry, slip of the tongue ‘The Return Of The Shadow’ picks things up where they were left after ‘The Last Alliance’.
Songs in which the bit dreamy vocals of Kaisa mesmerize the audience. The typical Battlelore hits like ‘Homecoming’, more up-tempo and completely in line with song like ‘Sons of Riddermark’.

I listen quite a lot to Battlelore, I feel a bit a lucky bastard because I even got to see them live once. And this release fits nicely in their discography. In my opinion every Battlelore album has some moments where they can’t keep my attention fully. But every album has some great songs as well. If I had to pick my favourite Battlelore album I had a hard time. I always think about Battlelore in terms of songs and not in terms of albums. And this new album fits perfectly in.

Battlelore made it clear, they’re back. And I love it! I hope this will not the their last release. When you’re able to come back like this after all these years, there must be more. And I’m waiting for it and in the mean time I will listen to all their great songs, and there are a few more now!