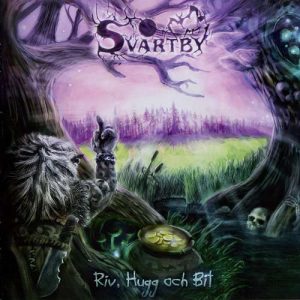 Svartby made the following statement: “As you’ve probably guessed, all the past band members are enjoying their lives of their own.

The Word of God (aka Giftsvamp – the Svartby world creator): You should accept 2017 single, Under Frusna Stjarnor (Under Frozen Stars) as a final release (despite the release date). Goblins in “Big Boss” managed to travel through time and space, and save themselves, but the witches in their time managed to summon the chtonic beasts which swallowed the world as is, earth, sky and sea. Under Frusna Stjarnor’s chorus is the end of the world as is and should be considered as such.

So. Under Frusna Stjarnor song is about the Witch Mother ascending a frozen mountain, summoning ancient beast-like giants and burying the world. This is our apocalyptic finale, and this is our non-happy end for the grim fairy tale. Cackle in the wind, if you may: feel the catharsis of destruction and void aftermath.”