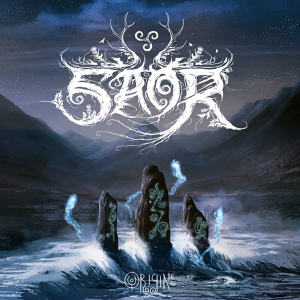 Andy Marshall is back, and the only word to describe his new release under the SAOR moniker is… genius!  A unique and hybrid blend of atmospheric black and folk metal, Origins is six tracks, composed and thoughtfully written to take the listener back to less modern times in ancient Scotland.

‘Call of the Carnyx’ is a masterpiece with the layers of melodies and vocals that change tempo from the acoustic beginning, progressing to the pounding folk inspired laden middle, ending with a barrage of sound.  Marshall also uses a Celtic war horn in this track just before some epic medieval melodies to close out the track.

‘Fallen’ introduces us to Celtic war drums as a folk melody quietly settles into the background as powerful metal riffs and vocals enter.  The song sounds like it could have been a forgotten track on a later Bathory record, having that droning backing vocal accompanying the raspy vocals and spoken lyrics. Strong chords and melodies are sprinkled through the track.  ‘Fallen’ is a bit progressive and seems to be a different type of track, something we haven’t really heard in the past Saor recordings, but still has the normal folk metal vibe.  This is one of my favorite tracks, I find myself listening to it over and over.

‘The Ancient Ones’ opens delicately and then progresses into a driving sound similar to a  Katatonia album, but the traditional tremolo picking of Saor announces itself and takes the listener onto another journey, into another ancient story, in another world outside of the one we exist in. This track has some real powerful moments and is well constructed musically with all the instruments involved.

‘Aurora’, is probably my least favorite track on the album.  It has some good moments with an explosion of sound then back to an organic acoustic ending.

‘Beyond the Wall’ is probably the most black metal style track on the album, with furious guitar riffs and growling vocals.

‘Origins’ is a typical Saor track as if from past albums and gives the listener and end to their sonic journey, eventually bringing us home.I think ‘Origins’ is a welcome addition to the Saor catalog. Each track builds its own melody, as if Marshall is penning a story, rhythm and instrumental work are his dialog and builds a sense of atmosphere leaving the listener wanting more and more after each track.  Andy Marshall is trying to progress the sound and break it off into a more “Pagan-esque” direction with less black metal undertones, I think he achieved this and having this new material is both exciting and invigorating in an already stagnate and overly flooded with  ‘one man bands’ genre.