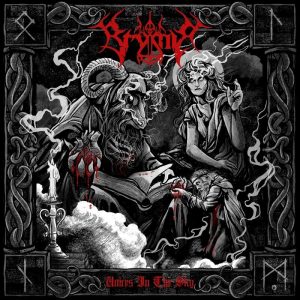 The power of folk is upon us comrades! Indeed, the covert melding of power and folk metal has slowly creeped into our foreground and has taken me among others by a stormy surprise. A very talented example of this maturing phenomena is Finnish quintet, Brymir, who have slowly but steadily established themselves as a power house over the last 11 years and 4 full length massive records, their cinematic compositions capturing listeners of all subgenres. One might draw immediate parallels to the epic influences of CoB, Insiferum and Wintersun. Certainly Brymir’s particularly upbeat and complex nuances of death metal melodicness drew me! Specifically with their previous release, Wings of Fire, completely enchanting me in the immense depth of all the intricate elements. Sadly, Folk-metal.nl missed the chance of rating it in 2019, as it would’ve been one of my top records. Voices as their newest effort however, showcases the same superior hammering riffs, diverse song structures and captive soundscapes, this go-around adding the twang of acoustic guitars, group vocal layers and a commanding grasp of string noodling.

From the opening tracks, there is a different sense of backing melodies and power elements, most evident in the aforementioned heroic choirs that weren’t as prevalent in previous releases, ensuring many a’metalhead connoisseur arguments over this esthetic choice in ambiance for decades to come. Even though Forged carries some of the heaviest passages of the whole record, the chants and acoustic glimpses persist, potentially averting some early heavier leaning fans. Middle tracks could also come across as fillers, lacking those so well executed heavy bridges from earlier records, instead amplifying emotional almost electronic ballad messages. Personally, the Rift Between Us gives me the strongest mixed feelings, forcing me to relive the traumatic disappointment of Dark Tranquility and In Flames’ demise, jadedly considering that all great things may come to their commercial end. Luckily, high pace and anecdotally sentimental Borderland reestablishes the record. It’s uncertain what compelled the band to conclude the track with a Ukrainian poet’s Taras Schevchenko excerpt from “My Testament” but this native has an intuitive inkling of why, reflecting on the current geopolitical events. A more broad perspective could argue Voices touches on the bleak and inevitable downfall of all human societies towards war. Closing original All as One and Dark Funeral’s covered Diabolis Interium present a commanding, somber conclusion to a well rounded but perhaps controversial production, reminding the listener of the artists’ phenomenal appreciation and rendering of all things metal.

Overall, I enjoy Voices in the Sky but am more akin to revisit Brymir’s other hits, avoiding the sentimentality and wholesomeness for something a little heavier. Personally, it’s impossible to escape critiquing the multiplied approach to scene-y vocals, resorted chants at every epic opportunity and over produced backing tracks. Granted, my seldom reviewing has been lackluster at best recently, among life changes, mental health spurts and other transgressions, I still feel this turn towards to more digestible content may set Brymir slightly back amongst oversaturated melodic folkish ambitions. Brymir is nonetheless, an act to follow and I look forward to their continued progression.