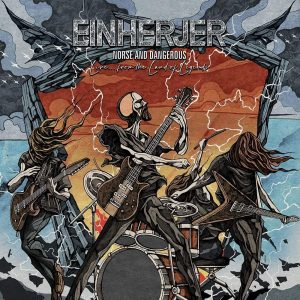 I stated last time when reviewing the Tyr live album that I am not a huge fan, however in the rare instance, there is a certain magic captured during the recording. Sometimes the songs played are not ones I would choose, I tend to like songs other fans don’t.  I have been listening to Einherjer since 1996, with the release of their Dragons of the North CD.  Instant fan, I was glad to see another talented band carry the Viking Metal torch.

I must say 29 years is a long time to wait for a live release, with that said, Einherjer has aged like a fine wine (or mead) and “Norse and Dangerous” show how the band has matured in their sound and as musicians. The show was recorded at their North Star release concerts in their hometown of Haugesund, so you know the fan base was strong.  The sound is up front and in your face, well produced and offers some intense guitar moments as well as blistering solos.  The track list is reflective of their many years and releases, from 2021’s “North Star” to “Dragon’s of the North”, and Av Oss, For Oss”. Favorite tracks live off this release is “The Blood and the Iron”, “Ballad of the Swords”, “Ironbound” and of course “Far Far North”.  This is a great introduction to their catalogue for any new Einherjer listeners, and for us old skool Viking metal heads.