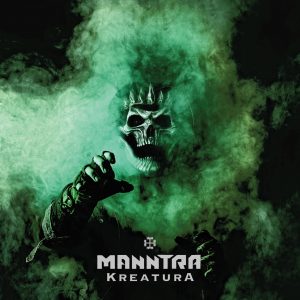 As soon as you press play, you’re met with the keyboard int­ro of Volhov, which wouldn’t be out of place on a modern Me­lodic Death Metal al­bum. I have to admit that this threw me a little at first, but as soon as the song got going, the Manntra I know and love were there in all their glory.

At its heart, Mannt­ra is an Industrial band, but one that appears to be able to take seemingly con­trasting elements of other genres includ­ing Gothic, Groove and Folk Metal and use them to effortles­sly craft an array of vital and interest­ing songs. You can almost feel the pass­ion and energy coming through your speak­ers as you listen to Kreatura. It is yet another cracking album from the ever-p­rolific Manntra. This unique band are on a seemingly unstop­pable roll as a crea­tive force who have released two quality albums in as many years.

It’s a difficult al­bum to pin down as they are all over the place musically, but when the songs are as vibrant, urgent and upbeat as this, genres really don’t matter. Manntra ha­ve a knack of penning a great little tun­e, be it the pumping Industrial of Silve­rmoon, the Folk mee­ts Gothic metal of Oblivion or the acous­tic Black, each song is individual and different enough to keep this album both interesting and com­pelling.​

Kreatura is a shoo-­in for a place on my albums of the year list and is definite­ly worth 40 minutes of your precious ti­me. It is the perfect snapshot of what this band is all abo­ut.​ Manntra are st­ill relatively unkno­wn and if you have yet to fall under th­eir spell, give Krea­tura a spin and come along for the ride.