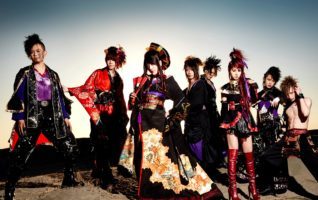 Eight years have passed since the release of their debut album “Vocaloid Zanmai”. The band, which has also released many original songs, has decided to release “Vocaloid Zamai 2” in its 8th anniversary year! The new album could be called the “Vocaloid Greatest Hits”, which includes both old and new Vocaloid songs.
Well, sounds good so far. I put it on. The only thing I wanted to do is to turn it of immediately. But since I’ve sentenced myself to reviewing this one, I have to keep on listening and even put it on for a second time.
What should I write. Wagakki was never a solid metal band. Their mix contained some solid rock which made it nice. But this is no rock or anything like it. It’s a boring mix of poppy songs for young teenagers. I guess this is an attempt to become very wealthy with poppy songs.
When you’re a Wagakki fan, buy it, listen to it, look in the mirror and explain yourself.
When you’re not, just look in the mirror and say “I’m OK” and put on some of your favourite loud music.