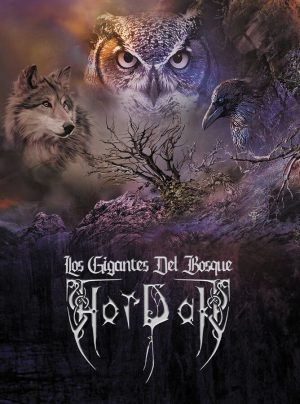 first came across Hordak way back in 2006 on their “The Last European Wolves” album and have followed them, sporadically, ever since, so I knew what to expect from their new offering. Or so I thought. The opening track is a blend of keys, choral female vocals and soothing nature sounds and is more than a little reminiscent of Finland’s Nest. Following this intro, I fully expected the next track Helianthus to come in hard and fast, but no, it follows in a similar vein…as does the rest of the album. When you’re expecting a Blackened Folk / Pagan Metal assault on your ears and are instead met by acoustic, instrumental Folk it is a bit disconcerting at first, but once you get past this, it is a beautiful and rewarding listen – for a while at least. I enjoy straight up Folk music as much as the next person, but it is hard to get past the lack of variation in pace. That said, the music itself takes you on a rich journey, at times Ambient in tone and at others Celtic or even Medieval. The personal highlight for me is Tyrn Gorthad which at an epic 13:34 is the longest song on the album, but at the same time, the most interesting, coming across as a sublime amalgam of Nest and vintage Mortiis. All in all, minor gripes aside, this is a soothing and beautiful album, ideal background music for the coming cold period of the year and fans of the genre will find much here to enjoy. Overall, a surprising little gem and a welcome addition to the Hordak back catalogue.