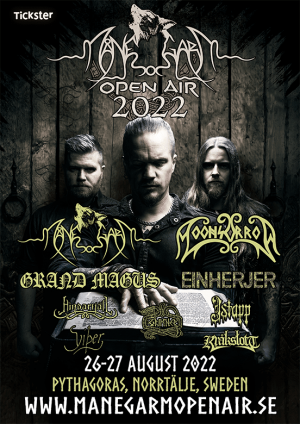 After two years of being postponed, for obvious reasons, the Folk Metal faithful were finally able to descend on the small Swedish town of Norrtälje for the second installment of Månegarm Open Air. Thankfully the line-up from the planned 2020 festival remained mostly unchanged as the majority of the bands, with the exceptions of King of Asgard and Viþer, were able to commit to the new date. ​

The year’s festival started with a bonus VIP evening on the Friday, with tickets limited to 300, and was completely sold out. For the small extra cost in comparison to a single-day Saturday ticket, those in attendance were treated to two exclusive acoustic sets and a Metal disco until midnight. All of this took place in the indoor area, with a small stage set up in the corner for the bands. First up on the stage was Hindarfjäll, who delivered a set of acapella / acoustic traditional Scandinavian Folk music, which wouldn’t sound out of place on the TV show Vikings. They were joined by various guests including Ted from Grimner and Månegarm mainman, Erik, who of course received a massive ovation from those in attendance. After a short break, Månegarm took to the stage and performed a set which again featured the vocal talents of Ted from Grimner as well as Erik’s daughter Lea who performed guest vocals on Blot. An unexpected heartwarming moment came when a French fan proposed to his girlfriend on stage. It was at this point that I called it a night and went to bed. It had been a long day and I wanted to save my energy for the main festival day.

For the second day, the festival moved outdoors to the main stage with the indoor area from the previous evening instead acting as a seating area for the bar. Also housed indoors was a signing area which was graced by Einherjer, Månegarm, and Grand Magus at various times during the day.​ Due to me underestimating the number of people who would be eating in the town, I was delayed and unfortunately missed festival openers, Kråkslott. That said, the band’s Stoner / Death / Doom Metal stylings are probably not of much interest to the majority of visitors to this site. The first band of the day for me was Istapp, who delivered a ferocious set of icy Melodic Folk Black Metal. What makes Istapp stand out from many of their peers is the “clean” vocals which they employ sparsely, but to great effect. With a set which included the likes of Vinterriket, Natten då Gud Blundade and I Väntan på den Absoluta Nollpunkten, Istapp brought with them the spirit of winter, despite or perhaps in spite, of the glaring summer sun. The crowd singalong of the chorus of “I Väntan på…” was an early highlight of the day for yours truly.

It was at this point the rain briefly swept in across Norrtälje, but even that was not enough to dampen Grimner’s spirit. The boys from Motala absolutely stormed it, as they did at 2019’s festival. Ever the consummate and entertaining live band, the songs were punctuated by interactions with the crowd, the most memorable of which was vocalist Ted commenting (in Swedish) that the weather was so warm that…Midgård Brinner (Midgard is burning). It’s not easy to explain without translating everything, but it got a laugh from the crowd. Highlights from their set were Eldhjärta and the brilliant new single, Västerled.​ A triumph.

​Norwegian legends Einherjer were the next band to hit the stage with their distinctive brand of Motörhead meets Dissection no-nonsense Groove Viking Metal. Despite some drum kit issues early in the set, Einherjer made the most of their 40-minute set time with classics such as Dragons of the North and Odin Owns Ye All getting an airing alongside newer cuts from latest album, North Star.

I own and enjoy most of their back catalogue, but Grand Magus were the odd band out on the lineup. Yes, their lyrics are often based on Vikings and Paganism, but the musically they are Trad-influenced Doom Metal. Their set was, I’m ashamed to say, background for me as I used the time that they were on stage to check out the merchandise stall and buy some beer and food. That said, what I saw when I did watch the stage was a fist-pumping Metal show which seemed to entertain the large crowd in attendance.

The penultimate band of the day / festival was one of my all-time favourite bands, Pagan Metal masters Moonsorrow. Opening with the overtly folky Kivenkantaja, the Finnish legends delivered a crushing hour-long set, mostly plucked from their most recent album, Jumalten Aika. The highlight for me was the monstrous Suden Tunti, but with set list being rounded out with Ruttolehto, Jotunheim and Ihmisen aika, this was a masterclass of Fok-infused Pagan Black Metal. Judging from the ovation they got as they left the stage this was exactly what the crowd wanted from the Finnish pioneers.

The night, of course, belonged to headliners (and festival organizers / hometown heroes) Månegarm who hit to stage to rapturous applause. They have been doing this since 1997 and in that time have released 10 albums of quality Folk Metal and honed their sound to razor sharp perfection. What helps Månegarm to stand out from the crowd is that their live band includes a violin player. This gives them a more organic sound and makes it easier to replicate the album tracks in a live setting. Well, what can I say about Månegarm, other than that were absolutely on fire. The set was chock full of Folk-Metal classics, including Ulvhjärta, En Snara av Guld, I Evig Tid and which culminated with the now traditional show closer Hemfärd. After the song had finished, singer Erik brought the event crew onstage and thanked them and everyone for coming to the festival and encouraging to go and drink more beer. It was the perfect end to their set and the evening.​ If any band deserves to be in a headline spot it’s Månegarm, regardless of whether it is their own festival or not.

See you next year!