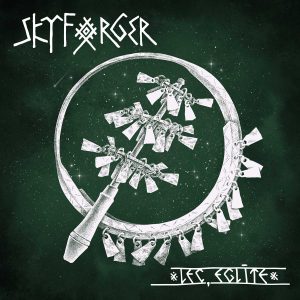 Latvian folk metal giants Skyforger made a video for ‘Jump, Fir Tree’, their latest collaboration with fellow pagans from the folk collective Skandinieki.

“Lec, eglīte” is an ancient Latvian song addressed to the fir tree to jump, leap and dance. It has been sung in many forms and versions for several centuries as a part of the traditional Latvian wedding, at the moment of bringing the bride to the groom. Also, “Eglīte” is a basic percussion instrument. In Latvian mythology, the evergreen fir tree represents eternal life, and is revered as a boundary marker between this world and the one beyond. Traditionally, wedding itself was seen as an act of dying as a young girl and boy and being reborn as a married woman and man. Fir twigs and branches were used to adorn the bride’s homestead, as well as her seat at the end of the table during the wedding feast, with the mythological purpose of keeping ill-wishers and evil people away, who would just prick their fingers and leave the bride unharmed.

Kristīne Neikena, director of the clip, says: “We have known the group Skyforger for a long time, and we gladly agreed to make a video for the new song “Lec, eglīte”.

One of the guiding principles of the clip’s message was to show strong husbands and productive wives in action in a typical Latvian environment, which should serve as a reminder to everyone that only with a strong backbone and the ability to take responsibility can we protect the values, traditions and land of the Latvian people. The Ethnographic Open-Air Museum of Latvia is an excellent place through which to convey this message. The filming process took place for three days and one night. We are grateful to everyone who participated in the creation of the project.”