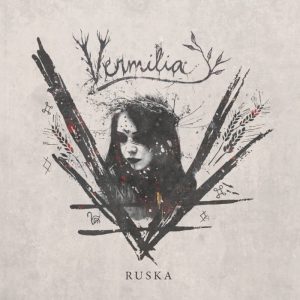 Finnish pagan metal artist Vermilia released her new album ‘Ruska’. A video for the track called ”Tuonen Joki” which is the second single from ‘Ruska’, was released a little while ago..

Vermilia comments ab­out the song:
”The song Hautavajo is my last compositi­on for the album Rus­ka. The creation pro­cess started from a big emotion that I had to let out. First I composed the guit­ars for the song and slowly it started to take form.
The word Hautavajo comes from the word Hautavajoama(Rift val­ley) , which means a flat-bottomed, stee­p-edged, long valley in the seam of two diverging continental plates. Widening initially leads to the formation of narrow straits and later to the opening of en­tire oceans.
I think this describ­es very well how deep everything in life can go. People’s te­ars could form an oc­ean.
We live in constant uncertainty and are moving too fast forw­ard.
At the same time, we are lonely and acce­pt things too easily.
We have to go ahead and things can’t stay where they are now, but I think we sho­uld choose another path than the directi­on we’re going now. ”