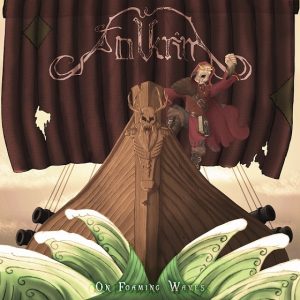 Folkrim, which was founded in 2020 hail from Finland, the glorious land of a thousand lakes, ice and satisfying beverage, have released a follow-up to 2021’s ‘Tales of Tumult’ EP.  We see a slight change in the new full length, not in music or lyrical themes, but this release gives us more songs in English. Folkrim presents to us fourteen tracks of Finnish folk metal entitled ‘On Foaming Waves’.  Yes, there are plenty of drinking references, but for this release we see a more mature recording from a new band that has leaped onto the folk metal scene. Many of the tracks are laden with slow opening melodies that progress into fast driving anthems that have heavy guitar hooks, great choral interludes, and a welcomed mix of black/death/clean vocals and a touch of Humppa-Metal. Folkrim teases our ears with violin, flute/piccolo, and accordion nuances, mixed in the crisp production of guitar, bass, drums and keyboards. Each song has folk melodies applied to make any folk metal fan appreciate what they have accomplished. Regarding influences, you can hear Alestorm, Korpiklaani, and Ensiferum in most of the songs.

I won’t get into a track-by track analysis, but some highlights of some tracks include song one, ’Blackout’ gives the listener a driving, fast and melodic tune with guitar hooks with some accordion, violin and flute mixed in.  ‘Unhinged Alchemist’ is a melodic violin intro which then moves into a Korpiklaani style song, but with a Folkrim touch. My favorite, the title track, ‘On Foaming Waves’ is a shanty-style pirate metal (which I can never say no to!) track that is Ensiferum-style in nature.  ‘Crack a Cold One’ has good musical flow and fun and entertaining lyrics and I love the chorus. ‘One More For the Road’ is very maturely written, flute and acoustic introduction, again reminiscent of older Korpiklaani. The final track, ‘ A Falling Tide’ is a fitting close to the album which for the most part is a dark and brooding instrumental until the 6:30 mark, then we get a Looney Tune, circus type interlude that injects vocals (of someone who appears to have had one too many) singing in a stupor that brings an essence of comedy.

Overall, the production on the album is spot on, the instruments and vocals sound clear and the mix is well polished; the album is well produced.  I like the fact that many musical styles are incorporated along with the folk metal foundation.  Folkrim have fun with some pirate metal, celtic punk and other styles that actually makes this release sort of progressive in nature.  I look forward to hearing more Folkrim!