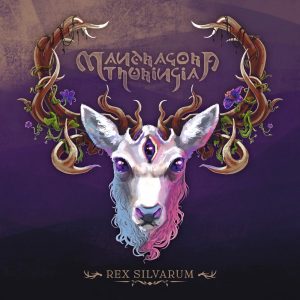 Mandragora Thuringia (definition: the Latin name ‘Mandragora’ for mandrake which bridges humans and nature) is a fairly new band in the folk metal scene with their debut album ‘Der Vagabund’ (2019). 2022 brings us a new release “Rex Silvarum’ (King of the Forest), which for a second release is a very mature endeavor. The album gives the typical folk metal fan everything they desire for the music, such as driving guitar accompanied by folk instruments like bagpipes and accordion.

On the vocal front, we again see diversity with a blended mix of clean and guttural vocals, overlapping with the instrumentation. The songs are very melodic and have great galloping percussion, which makes the music very upbeat and fun to listen to.  The key lyrical themes are based around nature.  Mandragora Thuringia also takes modern day situations and puts them into tales or stories.

I really like this album. My personal favorites are: ‘Sunufatarungo’, the title track ‘Rex Silvarum’, and notably ‘Falkenflug’, which has a great catchy chorus. “Rex Silvarum’ is a great follow-up album for fans of Equilibrium, In Extremo and Salatio Mortis.