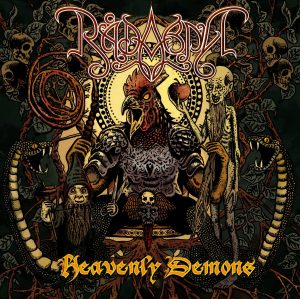 In September 2022, Folk Metal band from Sweden has released a new EP ‘Heavenly Demons’, which is the follow up to their full length 2021 release, ‘The Formorian Horde’.  It should be noted that ‘The Formorian Horde’ was voted Best Debut Album of 2021. The new EP ‘Heavenly Demons’, picks up where Radarna left off giving us three more tracks heavily influenced by Finntroll, Svartby and Korpiklaani. Those familiar with the band can expect the common blend of mythology mixed with their brand of humor and drinking songs while mixing in some celtic punk and pirate metal once again.  This blend makes the band and the EP unique and quite fun.  Alexander VanTrue switches between growls, screeches and clean vocals right out of a power metal tune which produce the sing a long song to accompany the accordion, violin and catchy guitar riffs. If you are in the mood for 13 minutes of folky tunes with lyrics such as “Get down, and hump ground, then shake groin right at your opponent”, then ‘Heavenly Demons’ is right up your alley.