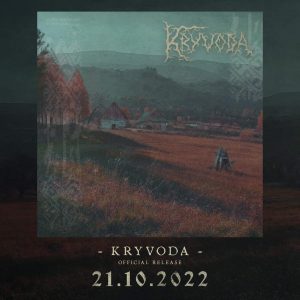 mewhat surprising, but it is unquestionably worth the wait. Bringing to mind such Pagan Folk Metal heavyweights as Obtest, Skyforger and Metsatöll, this is a definite statement of intent from this young (ish) five-piece.

When I pressed play on my device of choice, the first thing to grab my attention was the thunderous drums and the meaty production, which is unusual for such an untested, underground band. We all know that a bad production can derail even the best of intentions, rendering potentially great songs pretty much unlistenable despite the undeniable quality. That is most definitely not the case here, where the sheer quality of the clean finish gives the band ample opportunities to flex their considerable musical muscles. While the aforementioned drums and harsh vocals are busy pummelling your poor ears into submission, Kryvoda are performing a musical pincer movement on you, assaulting you unexpectedly with subtle, yet very effectful sopilka (a type of traditional whistle) melodies and a surprisingly high standard of song writing for a debut release. The result of this is an album which is as beautiful as it is brutal, expertly marrying raw aggression with traditional Eastern European Folk and capturing the very essence of Pagan Folk Metal in a succinct 38 minute package.

A particular highlight for me is Czyś widział, czyś słyszał which starts off with a very traditional sounding folk melody and almost martial drums, before kicking in with the now more familiar crushing Pagan Metal. If you are curious about the band’s sound, this song sums it up nicely in 6 neat minutes, but I genuinely think that you should listen to this gem in its entirety, as it was intended to be heard. If you would rather listen to a couple of songs before making a commitment to the album, then other standouts are Heretyk, Kruki and Christos Anesti. ​

This album is certain to be an instant hit for fans of the aforementioned Obtest and Skyforger, but there is enough quality here to reach out to a whole new fan base. As I said previously, I had no idea of what this was going to sound like, but Kryvoda have gained a new fan here. This is a very high quality and very cleverly put together album. There isn’t a bad song and as soon as it was over, I immediately put it on again. This is, no question about it, the debut album of the year for me and will be certain of a place in my top 5 albums of 2022.