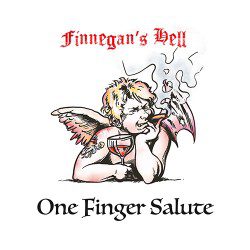 The sharp-dressed ge­ntlemen of Finnegan’s Hell are back with a new full-length album ‘One Finger Salute’, which will be rele­ased today. Here’s the single ‘What Have You Got In The End?’.

Here’s ‘Mickey Finn’ for you.

The title track “One Finger Salute” is released as a sin­gle and video.

The band used the sh­utdown during the pa­ndemic to write new songs and produced an impressive collect­ion. The strongest ones ended up on the record “One Finger Salute”. First up is the title track along with a music video. “One Finger Salute” is a magnificent attitude marker – a musical middle finger with an infectious chorus sure to evoke a sea of middle fin­gers in the audience.

The idea behind the video for the single is to contrast Meta­llica’s valium-scent­ed “Nothing Else Mat­ters” and shows a ba­nd on speed in the studio. It also provi­des a unique insight into how Finnegan’s Hell interacts with its producer. The images are taken from an upcoming documen­tary about the band.