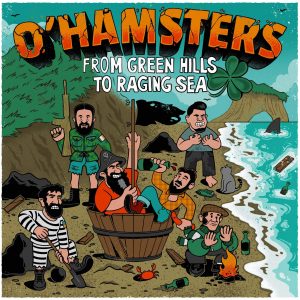 It took O’Hamsters a while to release a new album. The pandemic got in the way, but we all know what happened in the Ukraine this year. But the band decided to release this album now, since it’s no use to keep it on the shelf longer.

The O’Hamsters created an album like we’re used to by these folk-punkers. Their folk is of a Celtic kind. There’s one big difference, like lots of Ukranians who were able to speak Russian, but refuse it now, the band has skipped all Russian lyrics. So what remains are lots of songs in Ukrainian and an occasional one in English like ‘Black Sails’ and of course ‘Together as One’, since Finny McConnell probably doesn’t know any Ukrainian.
Like we’re used to by most of the folk-punk bands social issues and criticism are big sources for the lyrics. I can guess that’s the case in this album as well. Translated titles like Our Home, September ’56 and My Little Armalite suggest the main theme of the album is the war in the Ukraine. And like the Ukrain army strikes hard and reclaimed lots of cities and territory, O’Hamsters strikes hard with energetic songs in support to their troops and fellow citizens.

Great release which needs all the support you can give it.