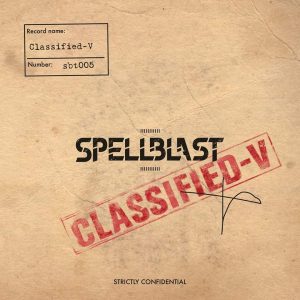 Spellblast fans, the Truth Is Out There! Gone are the old west references, this album gives us more. The songs tell a story, using lyrics and various effects to enhance the back story. The concept of ‘Classified –V’ reminds me of Iced Earth’s ‘Horror Show’, whereas each song has its own concept. The lyrics paint a picture for the listener using key words as brush strokes in the story telling. For example, the use of the words ‘voices’ and ‘from afar’ in ‘The Wow Signal’ and the ‘through the door’ and ‘hands” repeatedly in the  ‘The Hands Resist Him’. For those people who like things paranormal and solving mysteries with clues, the lyrics do this for you, although I resorted to using Google to look up the subject matter of each song after listening to it. (Yeah, I cheated.)
What we do find without using an internet search engine are songs that vary in nature and melody. ‘The WOW Signal’ is very Stratovarius-like with guitars and vocals. ‘The Roanoke Colony’ has a good driving drum beat, almost in a Native American style. ‘The Dyatlov Pass’ is more thrash in nature with guitars that sound violent and vocals and lyrics thrown at you to cause confusion and haste. ‘The Dancing Plague’, has similarities to “The Goblin Song’, which made me grin.
The record is listenable, but one problematic thing about ‘Classified –V’, each song seems too short. Just when I pieced the lyrics together and got the premise of the story, the song abruptly ends, leaving me wanting more. I think they could have extended each song (which averages between 3:50 – 4:20 minutes) and reduced the number of songs on the record to appropriately do justice to the stories. (Overall length of the record is 37 minutes) I would also like some more tempo changes, more lead breaks sprinkled around like in the epic Iron Maiden tracks. The songs seem a bit rushed.
Although, on ‘The Dancing Plague’ they do exactly what I suggested with the tempo changes and good lead guitar exchanges, but still cut the song short; total time 3:42.
Spellblast incorporates different styles of metal into ‘Classified –V’, but is nothing out of the ordinary like the concept they are conveying and not much folk metal incorporated. I still think they are trying to find their identity, and though this is a good attempt, it doesn’t give them the star power I think they have within to be a top band in the genre. Maybe I was hoping that by releasing a record every four years they would have given us more.

Overall rating for the concept is a 9 but musically I give it a 6/10.