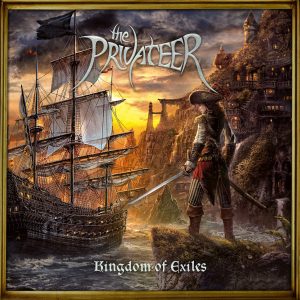 The Privateer’s new album “Kingdom of Exiles” will be released on January 20th. The band released a video for ‘Ghost Light.

Here is a lyric video of ‘The Darkest Shadow of Life’.

The band has been working on “Kingdom of Exiles” for a long time and is so happy to finally let the new album “Kingdom Of Exiles” off the leash! Expect nothing less than driving riffs, fat hooklines, great choirs and for the first time only female screams!

For the album cover they brought the amazing Dusan Markovic on board!

Look forward to a thick production from the sacred halls of Iguana Studios, which will take you on a quest for lost cultures, forgotten myths and hidden treasures.