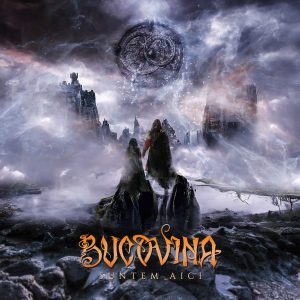 From all sides and from all countries, we are now assailed by Pagan productions and this one comes to us from Romania!! Their compatriots from Bucium and E-an-na had already broken down the doors and now it’s the turn of the “big brother” to work twice as hard!

Bucovina, he evolves in a pagan quite tinged with Black/Folk Metal but who knows how to give pride of place to the many melodic interludes that they master perfectly. Thus “Suntem Aici” is well above the clichés hitherto heard to the point that one sometimes even wonders if this disc still has something in common with its models. If the cd seems to have been built with the means at hand (in self-production), its modernity is not in doubt.

It is certainly more forward-looking than most of its competitors, who tend to take the opposite approach or look at what is happening with its neighbours. We find all the ingredients of the noisy and traditionalist style: riffs played with talent with sick solos, fairly long compositions often exceeding five minutes (all sung in Romanian), incisive singing full of rage and depth. The transplant took more than we could have imagined. It is obvious that this kind of performance would be a godsend for a label.

A band that can just as easily turn out to be the most primary and link up with technical exploits of an exceptional quality, that obviously does not run the streets. Redemption for Viking Metal comes from the Carpathians and is called Bucovina, after all, the men with the drakkar explored in their time the European continent in depth; they certainly left a few children hidden during their visit, of which the guys from Iași are their worthy heirs.

Break the bones to the christians!!!