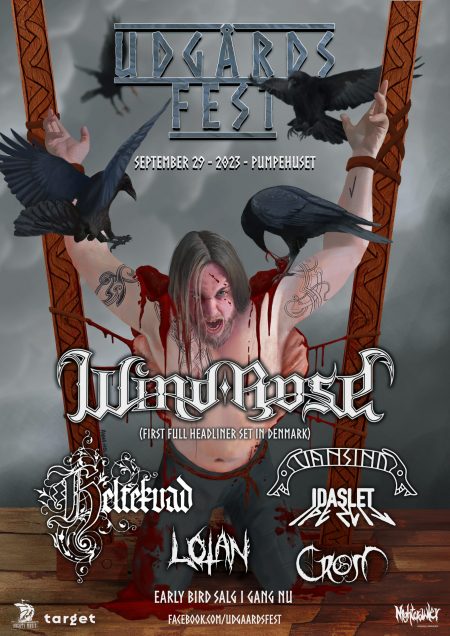 Udgårdsfest 2022 was a resounding success and after 3 years in Pumpehuset, Udgårdsfest has now quietly cemented itself as one of the most important of its kind for pagan metal in Denmark. 600 people bought tickets and with that we could sell out even before the doors of Pumpehuset were opened. The biggest folk-metal event ever on Danish soil? Oh yeah!

At Udgårdsfest 2022, we said goodbye in style to members of both Svartsot and Heidra, danced to Trold and Varang Nord, moshed to Vanir and sang along to one viking-metal hit after another with mighty TÝR.

Udgårdsfest 2022 WAS a gigantic party. Far more than we dared to hope for.

And the best part of it all is that of course we’ll be doing it all again in 2023! Therefore, mark 29 September 2023 in your calendars now. We will meet again in the dark surroundings of Pumpehuset. Today we are ready with the full program. And that’s with an Italian shooting star headlining Denmark for the first time!

25 million plays on Spotify and 37 million views on Youtube. These are unheard of numbers for a powered folk metal band. Nevertheless, this is what this year’s headliner – the Italian dwarves metallers Wind Rose – has reaped on the mega-hit “Diggy Diggy Hole”. In 2023, it’s completely impossible to avoid Wind Rose when talking about epic folk metal. The Italians have taken the world by storm since their fourth – Tolkien inspired album – “Wintersaga” hit the charts worldwide, with Napalm Records behind them. Likewise, the latest 2022 album “Warfront” has garnered fantastic reviews in the major metal press for their epic sound, which should hit all fans of names like Ensiferum, Turisas and Rhapsody. In January, they are support on Alestorm and Gloryhammer’s tour. On the other hand, we are looking forward to welcoming Wind Rose on their first real headliner job in Denmark. It will be a gigantic party when a packed Pumpehus lets the beer flow and the votes apply to newer metallic folk hits such as “Drunken Dwarves”, “Together We Rise” and of course “Diggy Diggy Hole”!

Epic! That’s basically what can be said about the German melodic metallers. Crom is playing their first ever Danish concert and it is actually with a brand new and as yet unreleased album behind them. Crom publishes “The Era of Darkness” in January 2023 and fans of names like TÝR, Bathory and Manowar can certainly look forward to that! This is sword metal at its finest. Of course, Eternal Champion wanted Crom as support at their latest concert in Germany!

Heltekvad (DK)
Ole Luk, former singer in Solbrud and the man behind Afsky (who also played an epic concert with us in 2019) will play at Udgårdsfest in 2023 with his new medieval black project Heltekvad. Heltekvad released their debut album “Morgenrødens Helvedesherre” in 2021 to great praise in the press. The band, which can rightly be called an all-star black metal band, consisting of members of both Afsky, Sunken & Morild, plays black metal with medieval melodies and moods. For Udgårdsfest 2023, the band will play one of their extremely rare concerts. So we are proud that the band has agreed to play at Udgårdsfest 2023.

They played at Udgårdsfest in 2021. Since then they have been on tour with Sylvatica and Trold and released a string of singles on Spotify. Vansind is viking metal with an emphasis on viking. It is at the same time hard-pumping riffs with deep growls in contrast to almost pop choruses with pure female vocals. Vansind is a breath of fresh air on the pagan metal scene in Denmark. Grab the sword and join the dangerous journey with Vansind at Udgårdsfest 2023.

Then it’s time to party! No one can stand still once Idaslet sets the scene on fire. We have experienced several fantastic parties with this wonderful new folk-metal band. Whether it was in a packed hall at Copenhagen Metal Fest or as support for Trollfest at Gimle. One thing is certain: the mead will flow, the floor will float and the dancing will be huge when Idaslet plays at Udgårdsfest in 2023.

Heltekvad will not be the only black metallic feature of the evening. Lotan returns to Udgårdsfest. This time with their debut album behind them. Get ready for a dark, aggressive and intense experience with one of the Danish metal scene’s most exciting black metal acts right now!

Spokesman and booker, Søren Weiss, about this year’s program:

I am insanely proud of this year’s program. Folk and “epic metal” have generally never been the big scam in Denmark. But that has been quietly changed over the past 10 years. This year’s sold-out party in Pumpehuset testifies that the audience is hungry for pagan metal. At the same time, the 2022 program was also quite “safe”, with “old” acquaintances on both the Danish and foreign folk/Viking metal scene. All names that we know can deliver the party! In 2023 we take the chance and jump into a program consisting mainly of new fantastic names. Several of the Danish names we feature this year have either just released their debut album or have one on the way. It is also the first time that Wind Rose headlines Denmark. However, I think the time is absolutely, absolutely right now. I saw the Italians’ show of force at Wacken this year. I have never seen the space in front of the Wackinger Stage so full and ready for a party. It will be the wildest folk metal party at Udgårdsfest 2023. I can already promise that!

Buy a ticket via: https://bit.ly/3OJDAkt