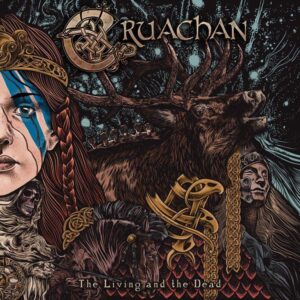 Cruachan released a new single of their upcoming album ‘The Living and the Dead’. The releasedate for the new album is set on 24th March.

‘The Crow’was the first single of the new album.

Folk metal pioneers, Cruachan, have released a brand new single and video. ‘The Crow’ was released on Friday 25th and is available on Spotify, Apple Music, Amazon and other streaming services. ‘The Crow’ features the vocal debut of Harry Potter and Final Fantasy actor Jon Campling as well as former GWAR vocalist Kim Dylla.

The Crow was written to commemorate those who died in Ireland’s Mother and Baby Homes.

Mother and baby homes were run by religious orders, starting in the 1920s, and funded by the Irish government. 9000 children died at 14 mother and baby homes over several decades. The institutions, where unmarried women and girls were sent to give birth in secrecy and were pressured to give their children up for adoption, were also responsible for unethical vaccine trials and traumatic emotional abuse.

For decades, the stories of these places and the atrocities carried out in them, were largely unspoken or brushed under the carpet — despite calls from the mothers who became virtual prisoners within their walls and children who spent their earliest years there, later sharing stories of neglect and abuse.

But as Ireland made strides to reckon with the uglier aspects of its conservative Catholic roots, deeply intertwined with the foundation of the state, there have been recent moments when the scale of the systemic abuses have been thrust into the light.

The biggest controversy, and the story that brought this to the worlds attention was the ‘Tuam Baby Controversy’ where hundreds of infant skeletons were discovered in a septic tank near a home in Tuam, County Galway.

In the song, the dead children are not forgotten. They are innocent souls, they fell on a battlefield they never asked to be in. The Crow is The Morrigan, she comes to claim these fallen children and save them from the horrors perpetrated by the church.

Cruachan changed the title of their upcoming album to ‘The Living and the Dead’. This title fits better to all the songs an absolute the new album.

The Hawthorn is about a mother returning her recently deceased child to the earth, to the faerie folk.
Cruachan statement: “The Crow focuses on the recent mother and baby home scandal in Ireland, The Morrigan comes to take the dead babies to the other world.
The Light is an instrumental that we are now playing live.
The Reaper was written about my dad when he was alive but I knew he had given up on life, the song was written out of frustration but it’s become even more poignant now as he died last year. I hadn’t read the lyrics since he died and only this week we started rehearsing it and the lyrics were devastating to read now that he’s gone.
The Harvest is about the importance of harvest time in ancient and recent Irish culture.
The Festival is a happy instrumental to compliment The Harvest.
The Ghost is another mother and baby home influenced song about the spirit of one of the deceased children, guest vocals will come from Kellie Schaefer from Athiest.
The Queen sticks out a bit as it is a huge song about the time Grace O’Malley met Queen Elizabeth in London.
The Children …. mother and baby homes again, grim grim grim.
The Changeling …. faeries stealing babies lol, this will feature guest vocals from Nella.
The Dark is a short black metal explosion.
The Witch will feature guest guitars by Stu from Venom, the song is about a pagan forest witch but it’s also a metaphor for female empowerment.”