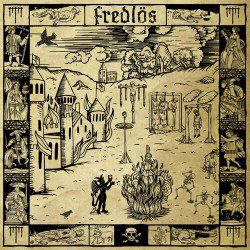 Fredlös’ self-titled debut album will be released in the Spring of 2023 and contains 9 dark, heavy, intense songs. Lyrically the album is a journey through the late Middle Ages, recounting the historical events from the perspective of the common people. Musically it’s a tour de force that defies any one description, weaving metal, rock, folk, and traditional music themes into a rich and varied tapestry. Now they have released a video for ‘Farsot’.

Before the album, we got the release of the band’s first single Warm Wet Soil – 7 minutes 22 seconds of swirling, dynamic, beautiful heavy music introducing the first chapter of Fredlos, where you are implored to reject the light and embrace the wet warm soil.