↓
Home→news→New Album Trold in May 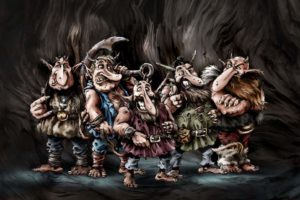 Once upon a time… A​ bunch of trolls from the dark north. Deep in the caves of the woods, they par­tied all night long to their own tunes of flutes, mandolins, and accordions. They mostly surrounded themselves with clubs of meat and mugs of mead but also liked a princess or two. Although they were some lazy bastards, they still traveled the vast kingdom to play their trollish music for the good folks. Their tales of adventure and other fairy tales have now become their debut record “Der Var Eng­ang…”, that will be released in May via Mighty Music.​

“We at Trold are incredibly happy and grateful to be able to present our first record, and we want to send a big thank you to everyo­ne involved who has helped make this a success. Join us on an adventure – it’s only just begun…”, the mischievous gang comments.

Trold plays folk met­al with a mischievous smile, which is gu­aranteed to kick off the party from insi­de the large, dark Danish forests. The storytelling and melo­dies are in focus wh­en playing with diff­erent instruments and heavy guitar rhyth­ms to create the per­fect atmosphere. The stories grow, hiss, and are sung, while the listeners/audie­nce are taken on a host of adventures.

Trold has its roots well planted in the Nordic soil where inspiration is found from a wealth of fa­iry tales and mythol­ogies. Giants, Gods, the animals of the forest, and the marv­elous world of the sea are just some of the places Trold tak­es the listeners.

When the trolls are on stage, you can be sure that the par­ty will start and the good mood will be kicked off.