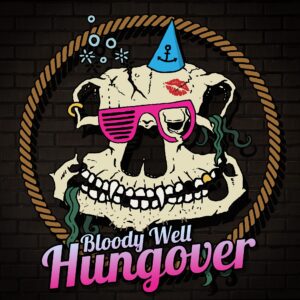 Anchorsmashed are making their triumphant return this Thursday, January 12th! After a rough year out at sea we’ve come storming back into port with a song about drinking, partying, and generally being a menace! Except… wait… that was last night! Oh lord my weary head! I’m Bloody Well Hungover!

“Bloody Well Hungover​ is the latest head-pounding pub-singalong smash-hit-to-be from Scottish pirate and folk outfit Anchormsmashed. A rowdy up-tempo banger that’s sure to get you tapping your foot, raising your pint, and waking up the next morning feeling rough. The chorus, catchy as it is, features backing vocals from audiences who caught the band live on their mini-tour last year. The room recordings were mixed into the song to give it the atmosphere of a bar room full of merrymakers. The artwork features a rather hungover looking skull guy reworked by the ever wonderful Wappenschmied to suit the mood of the song. Set sail, drink ale, wake up in the morning looking sickly and pale. Slanj!”