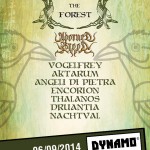 By: Colin & Yvette 6-9-2014 Dynamo; Eindhoven, The Netherlands Finally, a small folk-metal event with an super awesome line-up full of young, talented bands that’s not 7 hours away from here. Indeed, this year The Netherlands have one of these amazing festivals too, Into the Forest is it’s name. In … END_OF_DOCUMENT_TOKEN_TO_BE_REPLACED 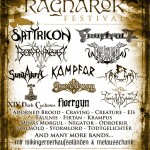 25/26-4-2014Stadthalle Lichtenfels, Germany Ragnarök is a small festival that’s taking place in Lichtenfels. However, never let the size of things misguide you, because on this festival the best of pagan- folk- and black-metal come together. With bands like Arkona, Finntroll, Skálmöld en Manegarm, there were enough bands for the folk-metal … END_OF_DOCUMENT_TOKEN_TO_BE_REPLACED

By: Nick Photography: Ute Ruhmann Fotografie Location: Bornstedt, Germany Germany, the perfect country for cheap festivals. Every subgenre has their own festival, so also one for the fans of pagan/folk/blackmetal. Since yours truly is such a fan, we traveled halfway may to Bornstedt for this small festival. Too bad that … END_OF_DOCUMENT_TOKEN_TO_BE_REPLACED 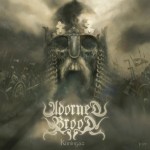 By: NickScore: 7/10Release: 23-11-2012 Adorned Brood. A band which is already playing since 1993, but has never been better than the mediocrity. Al 7 studio-albums weren’t more than just ‘nice’. Good to listen to for a while, but never more than that. Could Adorned Brood, with their 8th record, finally … END_OF_DOCUMENT_TOKEN_TO_BE_REPLACED

Adorned Brood is a German band, existing for more than twenty years now. Almost ‘Classic’ you should think. A lot has happened in those twenty years. Folk-metal.nl had a chat with the band about their biggest success, dreams and about they feel about being one of the ‘mature’ bands amongst a lot of starting bands. I spoke to the band at the Wolfstijd Festival 2012.
Adorned Brood performed very well at Wolfstijd. ‘Thanks, it went very well, it’s always nice to play in the Netherlands.’
Although the atmosphere, the hall was far from filled up. ‘There wasn’t a lot of public indeed, but the people who were present were very enthusiast!’ 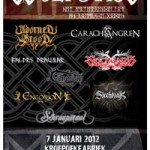 Wolfstijd Festival 2012 De Kroepoekfabriek, Vlaardingen 7 January 2012 By: Nick Photography: Dorien The Netherlands have gained a new festival! On the first Saturday of this brand new year, it was the first time for Wolfstijd festival, a festival with power-, folk- and blackmetalbands. Wolfstijd itself was well-organized, drink were … END_OF_DOCUMENT_TOKEN_TO_BE_REPLACED

Location: De Lantaarn, Hellendoorn, BL 11 April 2009 By: Michel The promotiontour by Tyr and Alestorm is visiting Hellendoorn. Heidevolk is support act and Adorned Brood is joing in this part of the tour as well. Adorned Brood I apoligize to the bands of this band, but it’s the third … END_OF_DOCUMENT_TOKEN_TO_BE_REPLACED 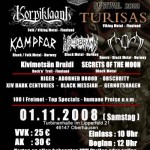 Location: Turbinehalle, Oberhausen (DE) 1 November 2008 By: Michel A great (folk) metal festival in an old factory in Oberhausen, fast and easily accessible from the Netherlands, only an hour across the border at Arnhem. A fantastic filled stage these days, which makes a trip across the border very worthwhile. … END_OF_DOCUMENT_TOKEN_TO_BE_REPLACED 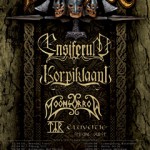 Venue: Funbox Amalie, Essen [de] Date: 05-04-2008 By: Colin Ein automobile, zwei automobile, drei automobile. Enough drunks, even for we got in, but it wasn’t allowed to take the booze with you inside, and this caused an enormous mess. A river of beer, wodka and what else. When we made … END_OF_DOCUMENT_TOKEN_TO_BE_REPLACED

Pagan Reign
The Art of the Time

The Rumjacks
Live in Athens

Minotaurus
Victims of the Underworld