Jano interviewed Jake of Aether Realm just before their show in Austin. 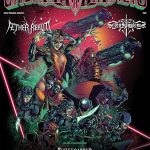 Date: 15 September 2021 Come and Take It, Austin USA Before I dive into the music, let me give a little praise for the venue. Texas is a pretty big state, and for a student making a day trip halfway across the state during one of his two free days … END_OF_DOCUMENT_TOKEN_TO_BE_REPLACED

After reviewing their new album, Redneck Vikings from Hell, I reached out to Aether Realm for an interview. The guys from the band seemed very open to the idea, and we got some excellent meaningful answers in reply about the background of the album, how the pandemic affected the industry, and some of their self-referential songs. 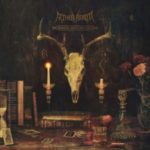 Rating: 9/10 Release: 1 May 2020 Label: Napalm Records Æther Realm’s latest release is by far their most extensively differentiated. Since their debut took a while to grow on me, I was rather surprised of the immediacy of impact that Redneck Vikings From Hell had on a track by track … END_OF_DOCUMENT_TOKEN_TO_BE_REPLACED 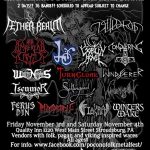 By: Jeff 3 & 4 November 2017 Pocono Plaza Inn, Stroudsburg, USA First of all this will be heavily biased….. let’s get that out of the way right up front. The 3rd installment of the Pocono Folk Metal Festival took place November 3rd and 4th in good ol’ Stroudsburg, PA … END_OF_DOCUMENT_TOKEN_TO_BE_REPLACED

North Carolina USA’s Æther Realm have released their sophomore album entitled “Tarot” via Primitive Ways on June 7th and what a 2nd full length it is. Featuring almost 75 minutes of music, the album also sees the band venturing into concept album territory of sorts and hitting numerous musical styles along the way. Lead vocalist/bassist Vincent “Jake” Jones and guitarists Heinrich Arnold and Donny Burbage all chimed in to answer some questions for us regarding the new album, the concept, the music scene in NC, the upcoming tour and a few other things…. check it out….

Tarot
Congrats on your new album “Tarot”…..what has been the response so far regarding it?
Jake: “It’s been pretty bonkers! Universally positive (except for a few posts on some Russian metal forum, one guy appears to have preferred our first album. I think that means we’re a real band?) I hope we can keep riding this wave for a while-one of my favorite things right now is waking up and finding a few new people that have “discovered” us, and written on our Facebook or sent us an email through Bandcamp telling us they think we’ve done their favorite album this year-I haven’t experienced that much. There was a little bit with “One Chosen……”, but not nearly like this, and it just makes me feel like we did something right you know?”
Heinrich: “It’s been awesome! Have quite a few friends who are NOT super invested into metal that are digging the album, which has been neat.”
Donny: “I’m just glad everyone digs the zany parts in it.” 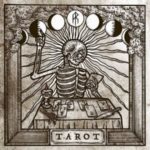 Rating: 9.5/10 Release: 7 June 2017 Label: Primitive Ways Records My expectations were pretty high when I heard that a new Æther Realm album was finally coming out. 2013’s “One Chosen By The Gods” is a spine buster if there ever was one so a sophomore effort from these North … END_OF_DOCUMENT_TOKEN_TO_BE_REPLACED 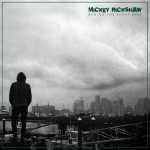 Rating: 9/10 Release: 1 November 2016 Label: Harbor Kid Productions / Bandcamp ‘Behind the Eightball’ is the second album by Mickey Rickshaw. The first one ‘No Heaven for Heroes’ scored an 8.2 out here on Folk-metal.nl. ‘Great doses of Punk (and Ska sometimes) with traditional Irish instruments and licks’ wrote … END_OF_DOCUMENT_TOKEN_TO_BE_REPLACED 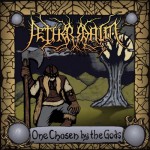 Rating: 8/10 Release: 8 January 2013 Label: Primitive Ways Records After an EP in 2011 and a single last year Æther Realm is releasing an full length this time with their Melodic Death and Folk-metal. Journey of Discovery is an over two minutes long nice intro. It builds up the … END_OF_DOCUMENT_TOKEN_TO_BE_REPLACED