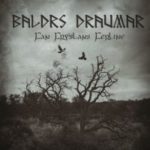 Hadagrims Fertriet tells the story of Frisian kin Rêdbâd from the eyes of his best friend, or ‘stalke,’ Hadagrim who also goed by the name Raven. Hadagrims Fertriet literally translates as “Hadagrims sorrow,” the sorrow he feels for the loss of his good friend as he writes a record of his life.

Baldrs Draumar has some pretty good news for you! But not only do they have big news, we also face a big challenge. To find out about both check out the video. Baldrs Draumar comments: “Long story short: because of Covid we’ve been sitting on our lazy arses for almost … END_OF_DOCUMENT_TOKEN_TO_BE_REPLACED

2019 has been/was an incredible year in music and ended with the release of the album of the year for me in “Magnus” by the always epic Baldrs Draumar. My expectations were pretty high, and they absolutely delivered on every count… heavy, catchy, folky and another successful, fully realized concept album. This is no small feat already producing a massively successful concept album in “Aldgillissoan” from 2015. It also shouldn’t be lost that this album displaced the latest Borknagar and Saor albums from my top of the year list, so you know it is the real deal. Friesland’s favorite sons answered some questions for us regarding the album, the concept, the writing and a bunch of other items….. check it out….. 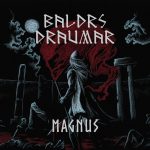 Rating: 10/10 Release: 23 November 2019 Label: Independent While I think most of us here at the site may have already picked our album of the year, I was holding out for the latest from Frisland’s favorite sons in Baldrs Draumar before deciding. Boy, am I glad I did as … END_OF_DOCUMENT_TOKEN_TO_BE_REPLACED

In for a Fest with Baldrs?

One of my most anticipated album for 2017 was the acoustic album by Friesland’s favorite sons, Baldrs Draumar. After being in my top album list in 2015 with their last electric album “Aldgillissoan”, the boys decided to go unplugged for their next release and it doesn’t disappoint at all. “Fan Fryslâns Ferline” is all new material written specifically for this release (with one exception in “Hadagrims Fertriet” from the last album making it’s way on). I sent some questions over regarding the new album, the process of writing and recording as well as the big release party for it….check it out……

New Brand,
Brand New
Congrats on your epic new album “Fan Fryslâns Ferline”….what has been the reaction to it so far?
“Reactions are beyond our imaginations. Everyone seems to like it very much.
Reviews are also very positive!”

Date: 7 October 2017 Location: Iduna, Drachten, The Netherlands Photography: WietskE Photography 26 September 1345 The Battle of Warns, a day of great importance to the Frisian people. 7 October the day of the release of Baldrs Draumars new album, their first acoustic one ‘Fan Fryslâns Ferline’. Another memorable day … END_OF_DOCUMENT_TOKEN_TO_BE_REPLACED

Rating: 9.5/10 Release: 7 October 2017 Label: Independent There were rumors for years, Baldrs Draumar was planning on an acoustic album. I know these Frisian guys from their folk-metal. I had the honor to watch them almost 8 years ago (hey, what’s 2 days in 8 years), I was immediately … END_OF_DOCUMENT_TOKEN_TO_BE_REPLACED 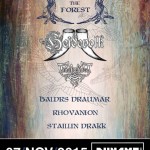 Into the Forest Festival 7-11-2015 Dynamo, Eindhoven, Netherlands The second edition of the Into The Forest festival in Dynamo Eindhoven, The Netherlands. After a successful first edition last year the festival (hosted by good friend and former folk-metal.nl colleague Nick Roovers) gets a sequel. This year the line-up has improved … END_OF_DOCUMENT_TOKEN_TO_BE_REPLACED

The Fryslâns Viking Horde that is Baldrs Draumar is making their triumphant return with their brand new album “Aldgillissoan” being released on April 18th. With a heavier sound than previous releases, Baldrs Draumar is poised to conquer with this new album. I was able to speak to the band regarding the new album, change in lineup as well as sound and the upcoming release show……

Aldgillissoan
Huge congratulations are in order for your return with “Aldgillissoan”, have you heard any early reviews of it so far prior to its release?
“Thank you very much. We do have some reviews already, all of which are very praiseful!”
For those of us that do not speak your native language, is there a simple definition to the album’s title “Aldgillissoan”?
“Of course there is, the title can be split up in two different words (Aldgillis and soan). The album is about Rêdbâd, who is the son of Aldgillis. Since we didn’t want to give the album the same name as the main character we referred to him as “son of Aldgillis – Aldgillissoan.” 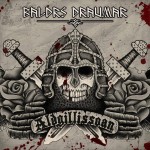 Rating: 9/10 Release: 18 April 2015 Label: Independent With so many amazing releases coming out this year, there seems to be too much music and not enough time for it all. My advice would be to stay awake a little longer and forego sleep, especially to check out the latest … END_OF_DOCUMENT_TOKEN_TO_BE_REPLACED